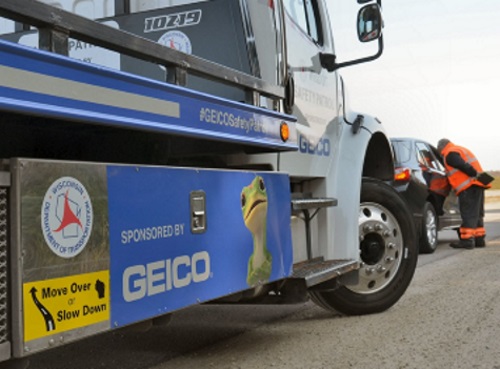 The Wisconsin Department of Transportation has a new sponsor and new look for its Freeway Service Team, also known as the Wisconsin DOT Safety Patrol.

National insurance firm GEICO is the new sponsor for this 23-year-old highway safety program, which is now deploying a new fleet of “incident-management” vehicles.

Services include providing small amounts of fuel, changing flat tires, and jump-starting vehicles, as well as removing debris from the roadway. The flatbed patrol vehicles also help relieve congested traffic at the scenes of incidents and crashes.

“Every second matters when there is a breakdown or a crash on the highway,” explained Craig Thompson, Wisconsin DOT secretary, in a statement.

“Having a specialized safety detail on patrol in high-volume areas is part of our commitment to safety,” he added. “The quicker we can regain normal traffic flow, the safer we all can be in that stretch of roadway.”

“GEICO is excited to support the Wisconsin DOT in their mission to make roads safer,” noted GEICO Regional Vice President Yvonne Obeng-Curwood. “The Freeway Service Team, like their peers around the country, do important work to clear roads and stop a minor incident from growing into a bigger one.”

[Editor’s note: In a related event, GEICO also recently became the sponsor of the Nevada Department of Transportation’s Freeway Service Patrol. In recognition of that announcement, both GEICO and Nevada DOT donated 300 Thanksgiving turkeys to the Three Square Food Bank in Las Vegas and the Food Bank of Northern Nevada in Reno/Sparks.]

Wisconsin’s Freeway Service Teams – which trace their heritage back to the late 1990s – logged 1.1 million miles, 35,110 service hours, and made 7,595 motorist assists over just the last two week,

The sponsorship announcement took place during Crash Responder Safety Week; a yearly national campaign aimed at raising awareness of the importance of roadway safety for both motorists and first responders alike.