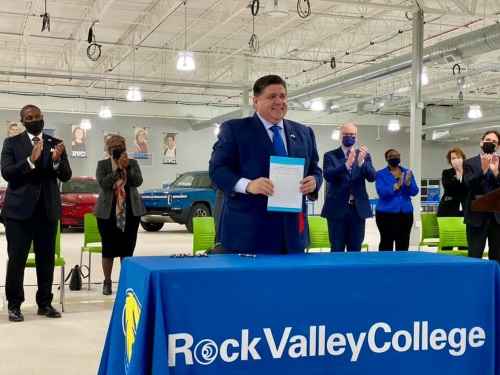 [Above photo by the Illinois Governor’s Office]

Incentives within the new legislation aim to benefit the state’s entire EV “ecosystem” by helping to build facilities, train Illinois graduates, and create thousands of jobs.

Those credits range from 75 percent to 100 percent of income tax withheld for creating new jobs or 25 percent to 50 percent for retained employees, depending on various factors such as company location.

“By signing the Reimagining Electric Vehicles in Illinois Act into law, we’re making clear to the world that Illinois is open for business and on track to be the best place in the nation to manufacture and drive an electric vehicle,” Gov. Pritzker said in a statement.

“It’s no secret that transportation is the leading source of climate pollution, so we’re incentivizing green economic development,” he added.

“It’s good for business and it’s the right thing to do,” the governor pointed out. “The Reimagining Electric Vehicles Act is about acknowledging there doesn’t need to be a trade-off between a cleaner environment and more jobs. We can do both, and today we take a giant leap forward in that quest.”

Additional enhancements from the legislation include a 20 percent price preference for EVs built in Illinois for state procurements and the creation of an EV Permitting Task Force to ensure permits for EV projects are streamlined.

The legislation builds upon the administration’s commitment to improving the state’s infrastructure by permitting the Illinois Department of Transportation to prioritize road projects that directly assist with locating an EV facility and the project’s infrastructure needs.

“Under Governor Pritzker, [we are] not just making critical improvements to the state’s infrastructure, but boldly reimagining how transportation looks in the 21st century,” said Illinois DOT Secretary Omer Osman.

“As we work to rebuild Illinois, the governor is providing the framework going forward to make sure we are investing resources to keep us a leader in supporting clean energy while creating economic opportunity in new and exciting ways,” he added.