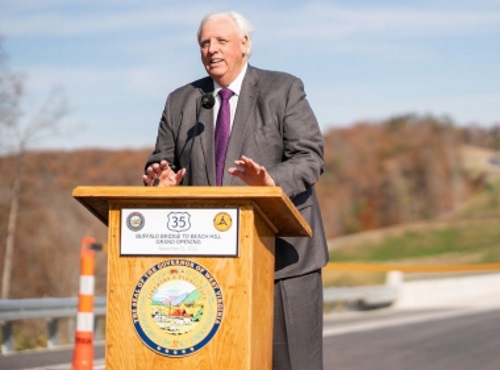 “What you see here today is a tremendous achievement,” Gov. Justice said in a statement. “I thank everybody that [made] this a reality; to make all this goodness happen.”

He noted that the U.S. Route 35 project is the largest single-contract undertaking within the governor’s $2.8 billion “Roads to Prosperity” highway program launched in 2017.

The governor said completion of the U.S. Route 25 project now allows travelers to utilize a “safe highway” that also accommodates increased traffic demands in the area. Motorists will be able to drive on smooth, four-lane pavement for 37 consecutive miles beginning at the Interstate 64 exit at Scott Depot and continuing straight through to Point Pleasant and the Ohio state line, heading toward Columbus.

In addition to creating 10 new bridges and a new interchange where U.S. Route 35 meets WV 869, the project required a completely new alignment for the highway.

He added that the U.S. Route 35 expansion project is one that was 53 years in the making. “Nine governors presided over this project,” he noted – pointing out that, in 1968, following the collapse of the Silver Bridge in Point Pleasant, planning was set in motion to change the alignment of the old Route 35.

“Governor Justice’s great vision – the Roads to Prosperity program – got it done,” Wriston pointed out. “Today, we have an achievement.”

“What began as a dream of the folks here and Mason and Putnam counties was a line on a piece of paper in 1992-1993, when we started on this, and today, it’s a safe, modern, four-lane highway,” added Ed Compton, director of engineering and operations for the Federal Highway Administration’s West Virginia division, during the event.

“I’d like to thank the men and women behind the scenes who did so much of the work – most importantly, the construction people who, for the last 30 years, have worked so tirelessly on this, especially the men and women who, over the last two years, worked every day through a worldwide pandemic,” Compton said.