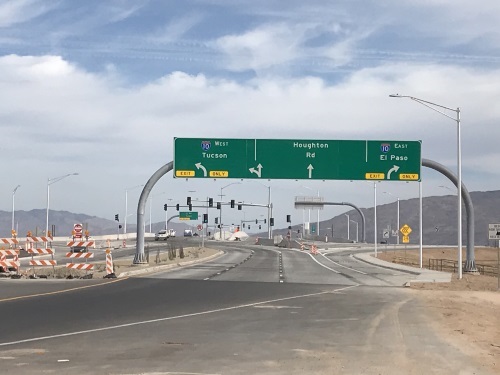 [Above photo the Arizona DOT]

Unlike a traditional diamond interchange, the state’s newest DDI – located at the Houghton Road interchange on I-10 – temporarily shifts traffic to the left while crossing the freeway. This allows for left turns onto the entrance ramps without waiting at an additional traffic signal, the Arizona DOT said in a statement.

The design also promotes safety because drivers turning left do not cross traffic while entering the on-ramp, the agency said – adding that its engineers selected the DDI design as it can handle higher traffic volumes in the growing part of the southeast Tucson area, where it projects traffic to increase by as much as 50 percent by 2045.

The new DDI also features larger entrance and exit ramps, along with more space for traffic to merge onto I-10 westbound, the Arizona DOT noted. Meanwhile, as part of the project, the agency replaced the old two-lane Houghton Road Bridge spanning the highway with a structure that features six lanes and improved access for pedestrians and bicyclists.

As a side note, the Arizona DOT also recently won an Emmy from the Rocky Mountain Chapter of the National Academy of Television Arts & Sciences for “Best Public Service Announcement.”

Launched in English and Spanish in 2020, the 30-second PSAs feature fearless people performing jobs with elements of danger and Arizona DOT said has broadcast its campaign on radio and television more than 32,000 times.