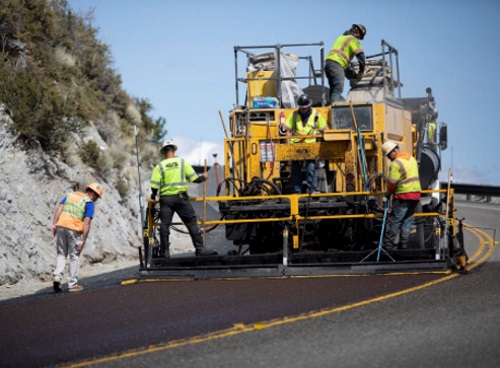 “We request relief for government agencies and businesses who have and continue to face unprecedented pandemic-induced supply chain delays and shortages that may undercut the anticipated benefits of the IIJA [the $1.2 trillion Infrastructure Investment and Jobs Act],” those groups – which includes the American Association of State Highway and Transportation Officials – said.

The letter noted that private companies and government agencies are reporting both shortages of and increased prices on manufactured steel, steel and plastic piping, paint, concrete materials, and many other items – with cost increases ranging from 15 percent to a doubling or tripling on some items like manufactured steel.

“Lead times for procurement and delivery of many of these materials has dramatically increased as well, and prospects for the coming year are worse,” the letter said.

Additionally, the American Traffic Safety Services Association found in a recent poll of its members that 64 percent are “either unsure or pessimistic” about their ability to meet their customers’ needs for roadway safety projects due to material shortages. Additionally, some 60 percent believe material shortages will continue for at least seven more months, and likely for more than a year.

The letter said one solution to those issues would be for Treasury to “clarify” the use by state and local governments of Coronavirus State and Local Fiscal Recovery Funds from the $1.9 American Rescue Plan passed in March to mitigate the effects of supply chain delays on material shortages and price increases.

Coronavirus [COVID-19] disease.’ Since the pandemic is clearly the driving force behind these supply chain delays and shortages, we believe it is clear that such utilization of the funding would fall within congressional intent of the legislation,” the letter said.

“Accordingly, we respectfully request that the Department of the Treasury update its ‘Frequently Asked Questions’ document and regulations for ARP funds, clarifying that recipient governments can use them to mitigate the effects of supply chain delays and shortages, such as for material price increases and the effects they are having on project costs,” it added.

AASHTO co-signed a March 28 letter with 35 other transportation organizations to Yellen in May along a similar tact for “clear guidance and flexibility” regarding the use of ARP funds to support transportation infrastructure projects.

AASHTO’s transportation policy team noted that the fact sheet Treasury issued with its interim final rule – specifically on page 60 – conformed to that request.

AAASHTO also co-signed a letter with six other organizations representing state and local governments to Congressional leadership on November 8 backing a bill passed by the Senate in October that would provide greater flexibility in spending American Rescue Plan or ARP funds – especially on infrastructure projects.