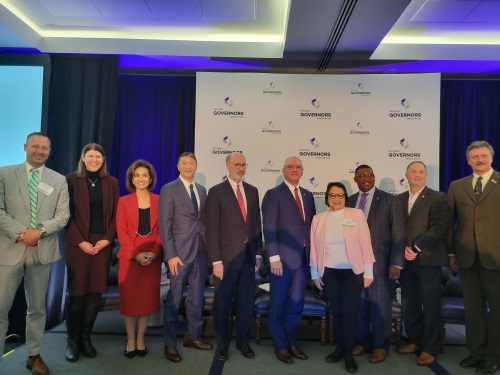 Participants in the three-day summit shared resources and discussed strategies for implementing the $1.2 trillion Infrastructure Investment and Jobs Act or IIJA on November 15.

“Governors, who have been leading on efforts to build and maintain infrastructure in their states and territories, have been urging congressional action on a stronger federal partnership to address aging public works to boost America’s economic competitiveness and quality of life,” explained Governor Asa Hutchinson (R) of Arkansas and NGA’s chairman, in a statement.

“Investments in infrastructure are investments in a better future for our country,” added Governor Phil Murphy (D) of New Jersey, who is NGA’s current vice chairman.

“Governors have been stepping up to meet this challenge, but we can’t do it alone,” he said. “We are looking forward to a renewed partnership with the federal government to make the investments necessary for a stronger economic future and improvements that benefit all Americans.”

Governor Larry Hogan (R) of Maryland – who served as NGA’s 2019-2020 chairman and led an initiative entitled Infrastructure: Foundation for Success – kicked off the summit by noting the progress governors across the country are making on infrastructure investments despite a lack of federal action until now.

Gov. Hogan noted that the federal support poised to flow from the IIJA would allow governors to build on that progress to make “once-in-a-generation investments” toward the nation’s infrastructure needs.

During the NGA summit, participants discussed funding and financing infrastructure including through public-private partnerships; collaborations on freight and supply chain issues; planning the future of transportation; jobs and workforce needs; resilient and sustainable infrastructure; and broadband.

The list of AASHTO board members who participated in the NGA summit proceedings were: