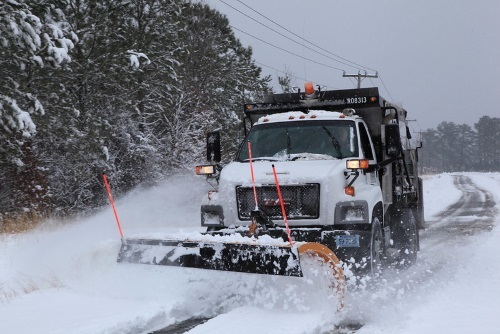 State departments of transportation across the country are taking a variety of steps to prepare for winter weather.

For example, the Virginia Department of Transportation has earmarked $211 million to fund winter operations. The agency noted it has more than 2,500 Virginia DOT employees and additional contractors on call for snow removal operations statewide, with more than 10,800 pieces of snow-removal equipment – including trucks, front loaders, and motor graders – at the ready.

The agency also said it has more than 706,000 tons of salt, sand and treated abrasives and more than 2.4 million gallons of liquid calcium chloride – an additive to salt for deicing – and salt brine on hand.

“Virginia motorists can be confident in [our] preparedness for our winter weather season,” noted Kevin Gregg, Virginia DOT’s chief of maintenance and operations, in a statement.

“We learned new processes last year due to the pandemic and a heavy snow season,” he added. “Those experiences, along with our continued training, have equipped us to handle the snow and ice that may impact the 128,000 lane miles of roadway we maintain across the Commonwealth.”

Meanwhile, the Kentucky Transportation Cabinet has doubled its fleet of tow plows, which can clear two lanes at once, from four to eight this year.

KYTC – which said it has 1,365 state-owned and contracted snowplow trucks ready to winter weather – is basing two of its tow plows in Frankfort as part of a “strike force” that can be dispatched to lend support to crews in different regions statewide during major weather events.

“Within the past 12 months we endured our first snow and ice season in the midst of a health pandemic, and tackled back-to-back severe winter events this year that blanketed roads with sheets of ice and debris,” noted KYTC Secretary Jim Gray in a statement.

“While the severity and frequency of weather events stands to be unknown, we are doing our best with the resources we have to keep critical state routes passable so citizens and commerce can keep moving,” he added.

To enhance its winter weather response efforts, the Illinois Department of Transportation recently debuted an improved winter road conditions map on its popular “Getting Around Illinois” website.

“Illinois winters are notorious for changing quickly and drastically, sometimes over just a few miles,” said Omer Osman, secretary of the Illinois DOT, in a statement. “These improvements to ‘Getting Around Illinois’ will give travelers information that’s more reliable and more local.”

Instead of continuing to display conditions by county, the revamped map will show how weather events are affecting roads under the jurisdictions of the more than 120 snow-and-ice team sections that work out of Illinois DOT facilities throughout the state. The agency said its snowplow drivers out in the field would also relay road condition information through a cloud-based system.

Along a similar line, the Nebraska Department of Transportation – together with the Nebraska State Patrol and the National Weather Service – has updated the state’s Nebraska 511 service with integrated weather information, updated icons, and an improved user interface, among other new features.

“[We are] proud to partner with the Nebraska State Patrol and the National Weather Service to be as prepared as possible when winter weather strikes to keep roadways open, and when necessary, close them for the safety of the traveling public and our teammates,” he added.

“The work we do, together with the information provided in our 511 service helps keep motorists moving while providing the best information possible for decision making,” Selmer said.

Meanwhile, the Colorado Department of Transportation has launched a “Winter Driving in the Wild” educational video series for motorists to awareness of the laws, preparations, and resources for safe and efficient winter driving.

The series includes videos about the state’s passenger vehicle traction law, tire and snowplow safety, winter preparedness tips and a guide for winter driving resources. The agency noted it plans to issue new editions of the series throughout the 2021-2022 winter season.

“Motorists who are unprepared for winter road conditions create dangerous situations for themselves and everyone on the road, not to mention the extended delays we see from spinouts, slideoffs and crashes,” said Andrew Hogle, Colorado DOT’s public information officer, in a statement.

“We’re excited to launch the ‘Winter Driving in the Wild’ series to share these crucial messages and have some fun with Colorado drivers at the same time,” he added.