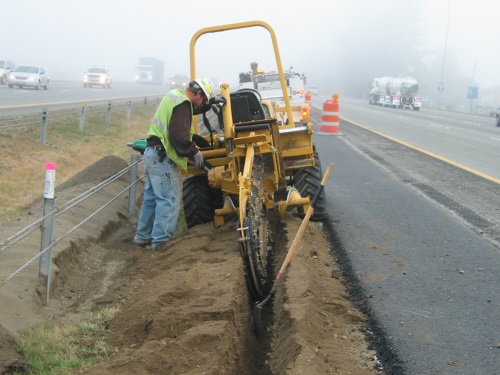 The Federal Highway Administration published a final rule on December 3 that will allow for the installation of broadband cable during road construction projects to avoid the need for further excavation in the future. That final rule originated from a requirement contained within the Consolidated Appropriations Act of 2018.

The agency is also seeking input on its development of guidance for two new electric vehicle charging station programs included in the recently enacted $1.2 trillion Infrastructure Investment and Jobs Act or IIJA.

The agency also noted that highway rights-of-way are commonly used to accommodate public utilities, such as phone lines, electrical lines and pipelines. Expanding their use to include wireless broadband technology is a critical next step in advancing connectivity in disadvantaged and rural communities that lack such capability, FHWA noted.

“By allowing broadband to be installed at the same time as other road improvement projects, we will reduce disruptions to residents, make better use of taxpayer dollars, and deliver economic opportunities to communities,” noted Pete Buttigieg, secretary of the U.S. Department of Transportation, in a statement.

FHWA Deputy Administrator Stephanie Pollack added that broadband capability can “level the playing field” and “improve the quality of life” by allowing for more remote work and access to education, health care, plus other services and opportunities from home.

The final rule means state departments of transportation will be required to identify broadband utility coordinators and establish a process to register broadband entities, FHWA said – with states coordinating telecommunications and broadband planning with transportation and land use planning to develop strategies that minimize repeated excavations.

Several state DOTs are already engaged in broadband deployment efforts. For example, the Arizona Department of Transportation began work on a project in October to bring broadband internet access to more Arizonans by laying fiber-optic conduit along a 46-mile stretch of I-17 from Flagstaff to Sedona.

The agency noted that its work crews plan to install the fiber-optic conduit in three-mile stretches at a time and expects to finish the project by the summer of 2022.

Meanwhile, with the IIJA establishing the $5 billion National Electric Vehicle Formula Program to help deploy an “interconnected network” of EV charging stations along highway corridors via formula funding provided to the states, the FHWA posted a notice in the Federal Register on November 29 to obtain feedback, with comments due by January 28, 2022.

“These programs represent the first-ever national investment in EV charging infrastructure and reflect the Administration’s commitment to combating climate change,” she said in a statement.

“Both programs will make EV charging more convenient and provide current and potential car owners with the confidence that they can get their vehicles charged whenever and wherever it is needed,” Pollack added.