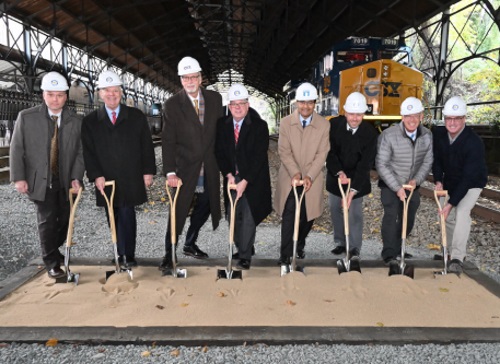 Governor Larry Hogan (R) and the Maryland Department of Transportation hosted a groundbreaking ceremony in late November for the public and private sector participants in the $466 million Howard Street Tunnel expansion project, which will reconstruct a 126-year-old freight rail tunnel to accommodate double-stacked container trains to and from the Port of Baltimore.

[Above photo via the Maryland Governor’s Office]

The project consists of vertical clearance improvements at the Howard Street Tunnel and at 21 other locations between Baltimore and Philadelphia so two shipping containers can be stacked and transported on top of each other via rail.

The project will reconstruct the Howard Street Tunnel – owned by railroad company CSX – to provide an additional 18 inches of clearance. Three additional bridges in Baltimore will also require superstructure work to handle the heavier trains and provide more clearance, the Maryland DOT said.

Double-stacking containers allows the Port of Baltimore to accommodate expected container growth in future years, the agency noted, while also providing a more cost-effective way to transport freight by rail, reduce traffic congestion along the I-95 highway corridor, and deliver environmental benefits by reducing emissions.

The Maryland DOT noted the original cost of this project topped out between $1 billion and $4 billion, with significant disruption to surrounding communities. However, by “utilizing advances in construction technology,” the project participants can build out more double-stack container clearance for significantly less money while minimizing the impact to surrounding communities.

“As we kick off reconstruction of this Howard Street Tunnel, we are proving once again that investing in infrastructure is critical to our state and national economies and to the lives of everyday Marylanders and Americans,” said Gov. Hogan in a statement. “This is a continuation of our concerted efforts to make the Port of Baltimore much more competitive with other ports for the extremely sought after containerized cargo market. It is an absolute game changer, not just for Maryland, but for the entire region.”

“Expansion of the Howard Street Tunnel … is becoming a reality because of the leadership of Governor Hogan and the hard work, vision, and collaboration of all the partners – Maryland DOT, CSX, the U.S. Department of Transportation, and Baltimore,” added Maryland DOT Secretary Gregory Slater.

“Freight rail is an essential link in the nation’s supply chain,” he added. “This investment strengthens that link for generations to come and positions the Port of Baltimore as the primary hub for the East Coast and a major conduit for goods moving across America.”