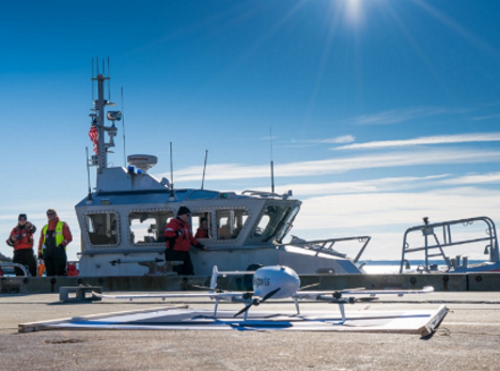 The aeronautics division of the Massachusetts Department of Transportation is collaborating with drone provider Skyports to demonstrate how drone services could link communities across the Cape Cod region.

[Above photo by Skyports]

MassDOT said it is investigating the uses of drones as a solution to connecting its remote communities to everyday services such as healthcare and logistics, and in particular is looking to develop a capability to provide emergency medical delivery after storms or other natural disasters.

The Cape Cod region contains numerous hard to reach communities including islands, peninsulas, and offshore energy projects where drones can provide an effective method of keeping these areas connected.

The agency said Skyports presents an ideal solution to the problem as its drones are capable of flying safely in harsh weather conditions and are able to carry varied cargo payloads up to 100 pounds.

The Federal Aviation Administration also granted Skyports the authority to operate beyond visual line of sight or BVLOS flights during its week-long feasibility project with MassDOT – a project the agency expects to use as a “guide” as it explores broader BVLOS drone operations in Massachusetts, to perform services such as rail network and road inspections.

“MassDOT is excited to be working with Skyports for this first delivery demonstration, helping us establish a foundation for new, innovative drone use cases to support communities across the Commonwealth,” noted Jeffrey DeCarlo, MassDOT’s aeronautics administrator, in a statement.

“The [MassDOT] aeronautics division established [a] drone program after recognizing the potential of drones to support MassDOT’s traditional inspection and asset management missions,” he said. “Massachusetts has a diverse geography and a complex airspace to navigate and Skyports has brought its tremendous flight experience to bear in order to make this first demonstration a success.”

Other state departments of transportation and state agencies are engaged in similar drone testing efforts.

In July, the North Carolina Department of Transportation completed two successful trial flights of a delivery drone from Hatteras to Ocracoke Island.

NCDOT’s Division of Aviation, in partnership with the NCDOT Ferry Division and U.S.-based drone logistics company Volansi, conducted the two eight-mile round trips that each averaged 18 minutes of drone flight time.

New York-based nonprofit NUAIR, which manages that UAS corridor, will help the consortium establish an “experimentation hub” offering more than 100 square miles dedicated to 5G beyond-visual-line-of-site testing and long-range flight paths for drones along that passageway.