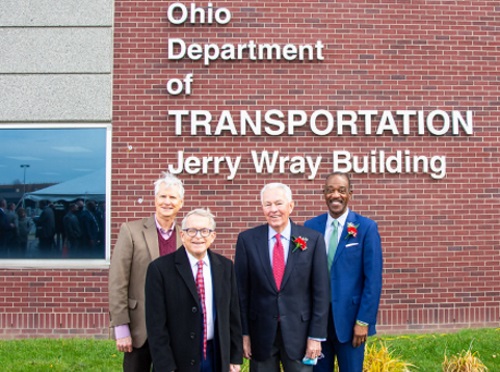 The Ohio Department of Transportation recently rededicated its Columbus headquarters to honor Jerry Wray, the agency’s only two-time director.

“Jerry Wray was passionate about transforming ODOT into an organization that displayed what he called ‘excellence in government.’ The changes he ushered in will benefit our state for decades to come,” said Gov. DeWine, who served as lieutenant governor during Wray’s first stint as Ohio DOT director, in a statement.

“Director Wray came to Ohio DOT with a clear vision of what it could be and masterfully imparted that vision,” said Ohio DOT’s Marchbanks, who served under Wray in various roles throughout both of Wray’s terms. “He believed the job of the department was first and foremost to make people’s lives better. I can’t think of a more deserving person for this honor.”

Wray directed the reorganization of Ohio DOT during his first term, streamlining processes and reducing the number of central office divisions by half. He eased the control the Columbus office had over processes and gave greater authority to the districts to better use the talents of the employees throughout the state.

He initiated a project selection process, referred to as the Transportation Review Advisory Council or TRAC where project stakeholders and interested parties could take part – a process which before had been conducted out of public view.

Under his leadership, Ohio DOT recruited a record number of women, minorities, and veterans. He also established a second-chance apprentice program to help transition ex-offenders from the Ohio Reformatory for Women into employment opportunities to prevent recidivism.

“All people want to be part of something bigger than themselves and to feel they are making a positive contribution to their organization, their community, and their fellow man,” Wray once wrote.

He currently lives with his wife, Eva, in Newark, Ohio.