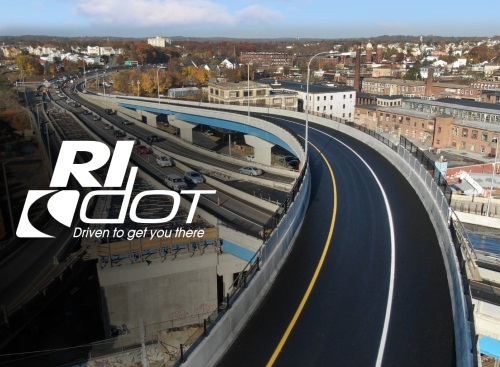 The agency said this “missing move” highway ramp – never included within the original Route 6/10 interchange, built back in the 1950s – required people for approximately 70 years to use local streets through Olneyville Square.

The new ramp – more than 940 feet long, passing more than 50 feet above Route 10 – is 26 feet wide with wide shoulders on both sides able to accommodate any disabled vehicles while keeping the ramp open to travelers. The Rhode Island DOT expects the new ramp will carry approximately 15,370 vehicles per day.

The flyover ramp – one of the signature pieces of Rhode Island DOT’s ongoing $410 million Route 6/10 Interchange project, expected to wrap up in 2023 – now redirects traffic away from those local streets, explained Governor Dan McKee (D) in a statement.

“This new highway connection serves not just the Olneyville community but anyone who travels Rhode Island roads,” he said. “All Rhode Islanders can benefit from reduced traffic, safer roads, and an easier commute. We’re making great progress in building a 21st century infrastructure in Rhode Island, and, with funding from the Infrastructure Investment and Jobs Act, we are well-positioned to make long-term, impactful investment in our roads and bridges, in jobs, and in our economy.”

“For nearly 70 years, Olneyville Square was used as a cut through to get to other parts of the state,” added Lieutenant Governor Sabina Matos (D). “With this new extension, we are reducing the number of cars in the square which will only help the quality of life for the residents and business owners. This flyover is a perfect example of why infrastructure matters. It is not just about building bridges, but it’s about changing and improving communities.”

“While the 6/10 project has two more years of construction, we were able to schedule our work to be able to deliver this ramp for the public well ahead of schedule,” noted Rhode Island DOT Director Peter Alviti, Jr.