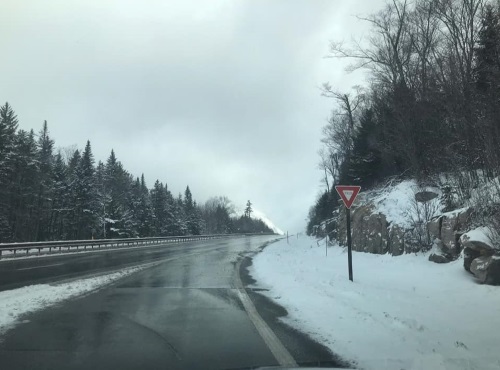 Researchers at the University of New Hampshire (UNH) claim that shifts in snowmelt patterns across North America due to climate change and warmer conditions could create “larger flooding vulnerabilities” and possibly lead to costly infrastructure failures.

[Above photo by the New Hampshire DOT]

Their study, recently published in the journal Geophysical Research Letters, looked at previous study predictions of change in snowpack, snowmelt, and runoff with the goal of translating that data into information for areas of Northern California, the Pacific Northwest, Alaska, and Canada.

That UNH study found “mixed-phase” precipitation – which is the shift between snow and rain – is increasing, especially in higher elevations, making it more challenging to predict future snowmelt: a dominant driver of severe flooding. As a result, snowmelt could decrease over the continental U.S. and southern Canada but increase in Alaska and northern Canada.

“Estimation of future floods can be a tricky business and yet it is important information for those planning future infrastructure,” said Jennifer Jacobs, a UNH professor of civil and environmental engineering, in a statement.

“For instance, if a region primarily has floods occurring during the winter, then this work could really help build infrastructure that can handle those future conditions,” she explained. “And, if the floods are decreasing, then the design values should also decrease rather than over design.”

The researchers used historical maps and regional climate model or RCM simulations that focused on North America. They found that in the mountainous areas of the West Coast, such as Northern California and the Pacific Northwest, there could be greater risk of rain-on-snow flooding due to greater warmth and more rain. This could increase the melting of any existing snowpack and lead to larger runoff potential, increasing flooding risk, UNH researchers said.

However, this differed in extreme cold regions like Alaska and northern Canada. UNH researchers said they found warmer temperatures in those areas could increase the opportunity for moisture that could likely lead to more winter precipitation like snow.

“These findings can be important in helping to develop or modify federal and state governments’ long-term policies for climate adaptation,” said Eunsang Cho, the study’s lead author and a former UNH doctoral student and now postdoctoral researcher at NASA’s Goddard Space Flight Center.

“For example, the current U.S. government standards for water-related infrastructure design are based on liquid precipitation data with very limited guidance on snow or snowmelt information,” Cho said.