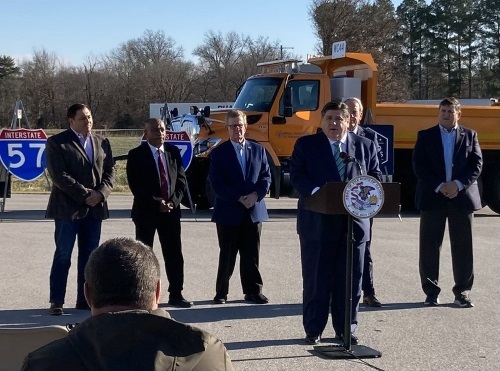 The Illinois Department of Transportation recently hosted a media event to launch the next phase of its $268 million Interstate 57 upgrade project through Southern Illinois.

That project seeks to add a third lane in each direction along one of the nation’s critical freight and travel corridors in order to handle current traffic volumes and cargo shipment demands while improving safety for motorists and commercial trucking operators alike.

Illinois DOT said the project’s “next phase” is a $67.6 million, three-year effort to upgrade nine miles of I-57 to six lanes from north of Illinois 149 to south of Illinois 154. This phase of the I-57 project also entails installing median barrier, resurfacing the existing lanes, updating deficient guardrail, adding rumble strips, and replacing bridges over the Big Muddy River.

“This major upgrade comes after we’ve already completed a successful, six-lane expansion along the Johnson City stretch of I-57 in 2020 and launched the ongoing West Frankfort renovations,” noted Governor J.B. Pritzker (D) in a statement.

“The I-57 corridor is one of the most important in our system, but it’s prone to backups and congestion that can spill over into neighboring communities,” added Illinois DOT Secretary Omer Osman. “Under Gov. Pritzker, we are transforming I-57 to accommodate 21st century transportation, as we are doing throughout Southern Illinois and the entire state.”

The Illinois DOT added that graduates of the agency’s Highway Construction Careers Training Program would be participating on this phase of the I-57 project. Illinois DOT said it launched that program in partnership in 2009 with John A. Logan College to provide minority and female students the opportunity to get on-the-job experience toward full-time work and a career in the construction trades.