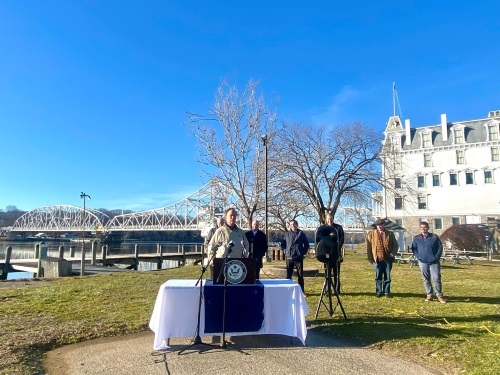 Governor Ned Lamont (D) (seen above at podium) said on December 21 that he placed $839 million worth of upgrades to Connecticut’s transportation system on the agenda for approval at the next meeting of the State Bond Commission.

[Above photo by the Connecticut Governor’s Office]

The governor – who serves as the commission’s chairman and determines which projects are placed on its agenda – said these upgrades are “long overdue” and compliment projects expected to be financed via the $1.2 trillion Infrastructure Investment and Jobs Act, which was signed into law in November 2021.

“We are about to enter a new era of transportation upgrades that will finally address some of our state’s most congested areas and transform our roads, bridges, rail, buses, ports, and airports into an efficient network that supports the needs of businesses and the people who live here,” Governor Lamont explained in a statement.

“These transportation priorities are an important down payment on Connecticut’s infrastructure future,” added Joseph Giulietti, commissioner of the Connecticut Department of Transportation.

Some of the transportation upgrades set for approval at the commission’s next meeting include: