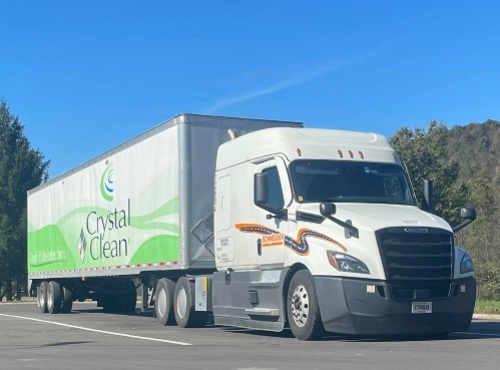 [Above photo by Schneider]

As part of this pilot test, Schneider will equip eight of their truck cabs with breath sensors in 2022, logging more than 100,000 sensor miles for each vehicle outfitted, for a collective total of almost one million miles. This test seeks to “refine” alcohol detection technology by testing it in real-world rough-and-tumble road conditions, while also exposing it to new types of drivers and a wider range of environmental conditions.

This Driven to Protect Initiative, in partnership with the Virginia Department of Motor Vehicles, is also helping carry out this pilot test with ACTS and Schneider.

Since 2018, Virginia has helped test in-vehicle alcohol detection technology that will determine if a driver is impaired with a blood alcohol concentration or BAC at or above the state’s applicable legal limit – and subsequently prevent the vehicle from moving.

“As a national leader in safety innovation, a collaboration with Schneider is ideal for helping expand the DADSS Program’s on-road testing, and we look forward to putting the breath system through hundreds of thousands of real-world operating miles as part of this trial deployment,” said Rob Strassburger, ACTS president and CEO, in a statement.

“This wouldn’t be possible without the support we’ve received from Virginia — the first state to step forward and conduct in-vehicle test trials on its roads,” he added. “Because of their dedication to technology and innovation, the DADSS breath system has gone from an early prototype to a viable safety feature for all vehicles in the future.”

According to a study conducted by the Insurance Institute for Highway Safety in 2020, when widely deployed in all vehicles, such alcohol detection systems could help eliminate the number one cause of fatalities on U.S. roadways and save more than 9,000 lives each year.