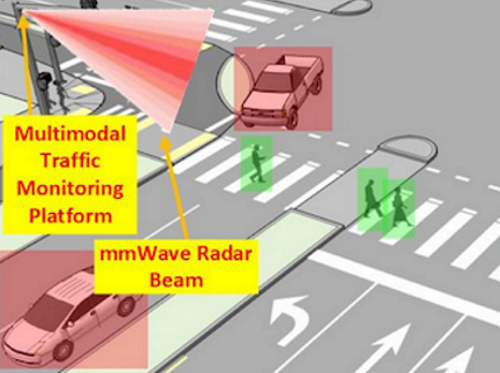 Researchers at the University of Arizona are developing a high-resolution radar sensor that can reliably distinguish between cars and pedestrians at intersections.

[Above image via the NTIC]

The sensors developed by that research – funded in part by the National Institute for Transportation and Communities or NITC, one of seven U.S. Department of Transportation national university transportation centers – also supplies the counts, speed, and direction of each moving target, no matter what the lighting and weather are like.

According to a new report – entitled Development of Intelligent Multimodal Traffic Monitoring using Radar Sensor at Intersections – those researchers developed a prototype based around a high-resolution millimeter-wave or “mmWave” radar sensor that outperforms cameras in low-visibility conditions and beats conventional radar by providing a richer picture.

“The key problem in multimodal traffic monitoring is finding the speed and volume of each mode,” explained Siyang Cao, one of the university’s researchers on this project, in a statement. “A sensor must be able to detect, track, classify, and measure the speed of an object, while also being low-cost and low power consumption. With real-time traffic statistics we hope to improve traffic efficiency and also reduce the incidence of crashes.”

Cao noted that mmWave radar is also different from other sensors in that it can provide relatively stable radial velocity, which is very helpful for us to identify the speed of vehicles.

That offers advantages when compared to Light Detection and Ranging or LiDAR-based sensors, Cao added. LiDAR systems are able to “see” in greater detail, he said, making it easy to determine what an object is. However, they have difficulty with movement and speed.

By contrast, mmWave radar can resolve the speed of a moving target much more reliably than LiDAR, Cao said, and works on a lower frequency band than LiDAR, making it more stable under different weather conditions such as rain, snow, fog, smoke, etc.

“We realize that sensor technology is moving to a stage that’s going to have a lot of new applications. On one hand, the cost of sensors is dropping and their performance is improving significantly. Meanwhile the surrounding technology – for example battery technology, communications, and computation enabled by artificial intelligence – is also improving,” Cao pointed out.

“For multimodal traffic monitoring, a sensor can collect information that can be shared with drivers via a next-generation communication network to improve mobility and safety at intersections,” Cao said.

In the future, the university’s researchers hope to refine that model further so such radar sensors can identify additional modes such as motorcycles, bikes, trucks, and buses.