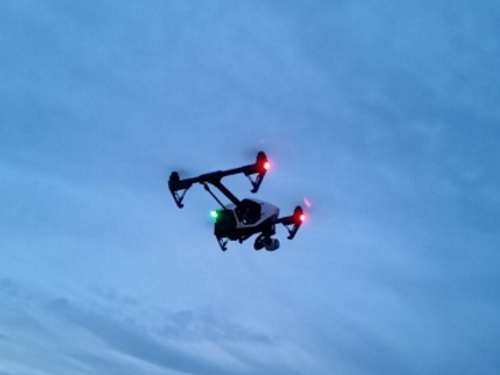 The Federal Aviation Administration recently expanded the authority of NUAIR and the New York UAS Test Site to operate unmanned aircraft ‘beyond visual line of sight’ or BVLOS across a further 35 miles of airspace within New York’s 50-mile drone corridor.

[Above drone photo by NUAIR]

Current regulations require drone operators to keep their unmanned aircraft within their line of sight, which limits the ability of drones to fly long distances.

The ability of operators to fly drones safely beyond the visual line of sight is the key to unlocking the “full potential and economic advantage” of routine commercial drone operations like medical and package deliveries, NUAIR said in a statement.

NUAIR added that it has conducted over 3,800 UAS test flights at the New York UAS Test Site within New York’s 50-mile Drone Corridor since 2014, equating to more than 950 flight hours.

State departments of transportation are also involved in similar beyond line of sight drone testing in different parts of the country.

In December 2021, the aeronautics division of the Massachusetts Department of Transportation began collaborating with drone provider Skyports to demonstrate how drone services could link communities across the Cape Cod region.

MassDOT said it is investigating the uses of drones as a solution to connecting its remote communities to everyday services such as healthcare and logistics, and in particular is looking to develop a capability to provide emergency medical delivery after storms or other natural disasters.

In July 2021, the North Carolina Department of Transportation completed two successful trial flights of a delivery drone from Hatteras to Ocracoke Island.

NCDOT’s Division of Aviation, in partnership with the NCDOT Ferry Division and U.S.-based drone logistics company Volansi, conducted the two eight-mile round trips that averaged 18 minutes of drone flight time each.

“This was just a small trial, but we hope to continue scaling this up to larger payloads and longer flights,” said Ben Spain, manager for NCDOT’s Unmanned Aerial Systems program. “Long-term, we could see deliveries coming to Ocracoke all the way from the mainland.”