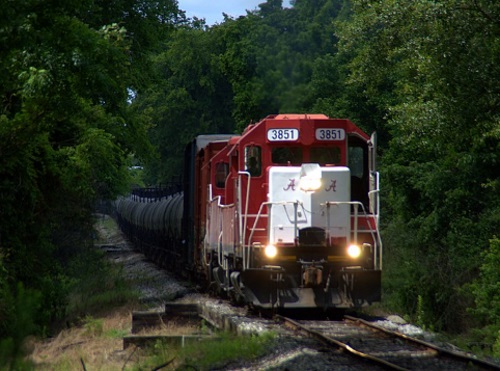 Alabama, Connecticut, and Oklahoma are pushing forward on a variety of railroad development and safety programs.

[Above photo via Wikipedia Commons]

Alabama Governor Kay Ivey (R) announced a plan on January 4 to create the “A-USA Corridor” – a proposed $231.6 million program of railroad projects to upgrade economic development infrastructure in central and southern parts of the state.

The A-USA Corridor is a public-private partnership, with Norfolk Southern funding more than 50 percent of the project.

Alabama is investing $5 million into the project, with the remainder coming from present and future federal Consolidated Rail Infrastructure and Safety Improvements Program grants through the Alabama Department of Transportation, in partnership with Norfolk Southern.

“Working together with the Port in Mobile to build out our infrastructure to move the commerce for Alabama and the greater southeastern region of the country must be one of our top priorities,” the governor said in a statement. “Creating good port access to central Alabama is a key part of this initiative and it can provide options for freight containers to reach new destinations inland.”

The first phase of the A-USA Corridor initiative involves a $71.6 million initiative to link the Port of Mobile with the McCalla Intermodal Facility near Birmingham. This 280-mile rail corridor will also link mega economic development sites in three counties, each totaling more than 1,000 acres. A fourth site in Jefferson County will see the development of a 104-acre site with up to a million square-feet of warehousing under roof, according to the governor’s office.

Meanwhile, in Connecticut, Governor Ned Lamont (D) helped spearhead the signing of a new lease in December 2021 establishing a partnership agreement designed to launch a new era in the management of the two rail stations in New Haven owned by the Connecticut Department of Transportation.

The New Haven Union Station Partnership establishes a new 35-year lease and funding agreement between the Connecticut DOT and the City of New Haven. The lease has two 10-year extension options that will allow the city (through Park New Haven) to lease and operate the Union Station Transportation Campus.

Plans call for revamping the basement and first two floors of the station to allow for new retail and additional amenity options for commuters, improving vertical access (stairs, elevators, and escalators) to enable future adaptive reuse of the upper station floors, and expanding public restrooms.

In addition, the deal aims to redevelop surface lots on the Union Station Campus via a public-private partnership, including construction of new intermodal space for bike, transit, and additional parking in the form of a 600-space parking garage.

“All of the parties to this partnership recognize the importance of a transportation center like Union Station to New Haven and the state of Connecticut,” noted Joe Giulietti, Connecticut DOT commissioner, in a statement.

“A railroad station connects us and keeps us moving forward,” he added. “For the last 100 years, Union Station has been a familiar, welcoming junction where literally millions of people have embarked on journeys and come home again. The agreement signed today ensures that it will continue to be a centerpiece of transportation infrastructure in Connecticut and evolve in ways that meet the future transportation needs of our state.”

“Collaboration and involvement with the community is essential for the needs identified in the state action plan to not only improve highway-rail grade crossing safety statewide, but also for them to be implemented and be effective,” explained Jared Schwennesen, multi-modal division manager for the Oklahoma DOT, in a statement. “The survey takes place every five years and results will be included in the plan.”

Oklahoma DOT, which oversees rail safety within the state, invested more than $100 million in railroad crossing improvements during the past five years. The agency said it works in partnership with the railroad companies and federal government, including this federally mandated highway-rail grade crossing survey, to make continued safety improvements with its 3,450 public at-grade crossings.

Per federal requirements, the Oklahoma State Action Plan will include a review of key crossing risk factors, while identifying crossings with crashes in the previous three to five years and listing strategies for addressing grade crossing safety issues.