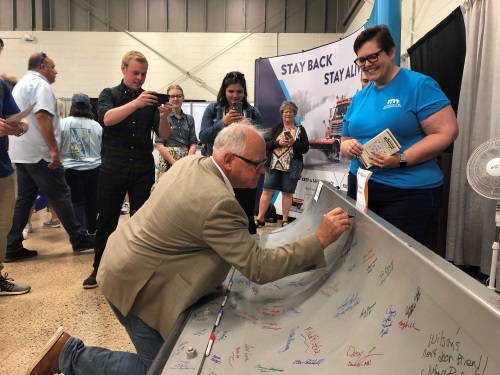 Margaret Anderson Kelliher (at right in above photo) is stepping down as commissioner of the Minnesota Department of Transportation to take on a new role as director of public works at the city of Minneapolis.

Governor Tim Walz (D) originally appointed Kelliher Minnesota DOT commissioner in December 2018. She previously spent 12 years in state politics, four of them as speaker for Minnesota’s House of Representatives, and after losing the democratic primary for governor back in 2010, became CEO of the Minnesota High Tech Association.

“Every Minnesotan deserves safe and efficient roads that bring them home to their families, and as we look to the future, our next generations of Minnesotans deserve clean air and a healthy climate,” the governor said in a statement.

“Every day, [she] has worked tirelessly toward those goals,” he added. “I am confident that she will continue to serve Minnesotans well in her new role with the City of Minneapolis, and I thank her for her commitment to our state.”

During her tenure at Minnesota DOT, Kelliher oversaw billions of dollars of investment to build safer roads and bridges and improve connections and mobility for people walking and biking statewide.

She expanded the agency’s work consulting with tribal nations and launched the Sustainable Transportation Advisory Council to help the agency reduce carbon pollution from the transportation sector.

She also served as chair of the Diversity & Inclusion Committee and vice president of the Mid-America Association of State Transportation Agencies; co-chair of the Governor’s Connected and Automated Vehicles Advisory Council; and chair of the Minnesota Environmental Quality Board.

Kelliher has also served as the chair of the Committee on Environment and Sustainability since December 2019 for the American Association of State Highway and Transportation Officials.