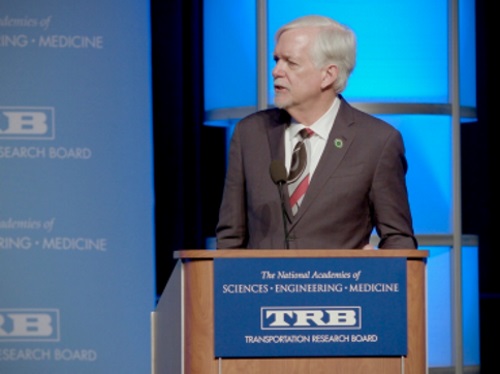 Roger Millar (seen above), secretary of the Washington State Department of Transportation, headlined a panel discussion at the Transportation Research Board’s 2022 annual meeting on January 11 in Washington D.C. entitled “State DOTs Partnering to Deliver Public Benefits of the Infrastructure Investment and Jobs Act.”

Millar – who serves as the 2021-2022 vice president of the American Association of State Highway and Transportation Officials – delved into the disbursement specifics of the funding from the $1.2 trillion surface transportation law, also known as the IIJA, passed in November 2021.

“The enactment of the IIJA representatives a historic level of federal investment in transportation infrastructure – a level not seen since the creation of the U.S. highway network,” he explained. “For my agency, we are projecting receiving $200 million in additional annual funding from the IIJA. However, now, we are the dog that caught the car – we need to get that funding out there on the ground to help our constituents.”

While Millar stressed it is “going to take some time to implement this,” the focus on IIJA implementation is to quickly and efficiency as possible deliver the benefits of this legislation “that people expect and deserve.”

“We are looking at safety, resiliency, emission reduction, and equity goals,” he said. “We are going to need to strengthen partnerships with both our federal and local partners to make it work.”

State Senator Wayne Harper (R) of Utah, who also co-chairs the standing committee for the National Conference of State Legislatures, explained during the panel that the “biggest component” of the IIJA, in his opinion, centered on the surface reauthorization portion of the legislation. “Providing significant formula funding to the states is key,” he said. “The other key portions of the IIJA are its focus on bridge rehabilitation, resiliency, and carbon emission mitigation.”

Yet he did offer up two concerns about the IIJA going forward. “First, the short-term CR [continuing resolution] now in place only maintains current funding levels, not the higher ones authorized by the IIJA,” he said.

AASHTO’s transportation policy team noted that concern after passage of the CR in December 2021 that, instead of a full-year appropriations package, Congress in effect imposed a six-month extension of fiscal year 2021 funding levels.

Harper also expressed concern that the IIJA did not resolve the long-standing insolvency issues surround the Highway Trust Fund. “That needs to be addressed to provide funding certainty going forward,” he said.

Yet Victoria Sheehan – commissioner of the New Hampshire Department of Transportation and AASHTO’s immediate past president – noted that the programs in IIJA “align with what we have been hearing from our public meetings; that we need to focus on safety, resiliency, and maximizing value of the transportation infrastructure that we currently have.”

She pointed out that state DOTs will be called upon to play a “greater role” in terms of other infrastructure areas, such as broadband and energy, covered by IIJA funds.

“We need to make sure that we are prepared to support and deliver infrastructure projects on time if they are in the state DOT right of way,” she explained. “We want to dig once and align our transportation project schedule with the needs of other infrastructure investments.”

Everett Lott, director of the District Department of Transportation for Washington D.C., expects to deploy IIJA funds to eliminate what he called “transportation deserts” across his city.

“We have ‘pockets’ across the city that don’t offer equitable access to different transportation modes,” he said. “At the end of the day. We are trying to encourage residents as well as visitors to get out of single-occupancy vehicles, so we need to provide more transportation options in order to enable that.”

Finally, Lorie Tudor – director of the Arkansas Department of Transportation – stressed that regardless of the different urban, rural, and demographics of the states, the “one thing we all have in common” is the need to provide “solid transportation leadership” to accomplish IIJA investment goals.

“The key emphasis will be on our partnerships with federal agencies and other state agencies to take full benefit of the IIJA and make sure we do not duplicate our efforts,” she said. “Everyone needs to bring their strengths to the table. We all need to be involved so we gain the maximum amount of flexibility we can from the IIJA, regardless of whether our transportation needs are more rural or urban in nature.”