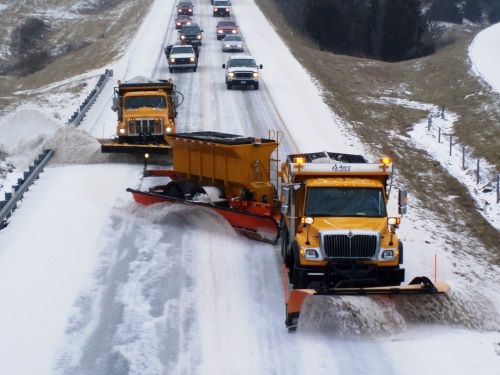 A research team led by Iowa State University and funded in part by the Iowa Department of Transportation is developing a new navigation system to aid the state’s snowplow operators.

[Above photo by the Iowa DOT]

“That person operating the snowplow in the snow is facing so much workload and stress,” explained Anuj Sharma, a civil engineering professor at Iowa State University and a research scientist at Iowa State’s Institute for Transportation, in a blog post. “We want to at least give them a helping hand and some tools to help.”

To do that, Sharma has assembled a research team to develop a new navigation system for Iowa snowplows – with a two-year, $502,265 grant from the Iowa DOT helping support their work.

“While visibility in town might not be much of an issue, when you get in the wide-open spaces it gets really bad,” noted Tina Greenfield, the coordinator of the Iowa DOT’s Road Weather Information System. “Snowplow operators can struggle to see and have a tough time navigating the road. At times, they can’t see a car in front of them.”

She added that big snowdrifts also make it harder to clear roads when visibility improves and plowing resumes – slowing the return to safe driving conditions.

That’s why Iowa DOT is exploring various sensors, radar, and GPS systems that could help snowplow operators stay on the roads during low-visibility conditions.

“This is all about driver aids,” Greenfield said. “We’re not talking about technology taking any kind of control over the vehicle. The driver would still be responsible for controlling the vehicle. This is more of a navigation system than a control system. That’s where we’re looking to [the university] for assistance.”

The research team expects to determine which sensors and technologies can best withstand winter conditions while maintaining navigation accuracy in a whiteout.

Working with the Iowa DOT, the researchers will also examine which technologies are most useful to a snowplow operator. Once the researchers understand how all the sensors and interfaces work together, they’ll equip a real snowplow and do simulations and eventually road tests.

Sharma said the entire system would be contained within the vehicle, with no need for any kind of remote command and control that would depend on network connections that are likely to be trouble in a storm.

This particular project is the latest in a string of research initiatives undertaken by Iowa DOT to improve snowplow operations, especially in terms of safety.

In 2018, the agency wrapped up a three-year pilot project that added rear facing blue and white lights to the already existing amber-colored lighting systems on about 200 of its snowplows in central Iowa.

The agency noted in a blog post at the time that the addition of blue and white lights helped reduce rear-end and side-swipe crashes with motorists from between 14 and 15 incidents per winter operation season to between four and six incidents.