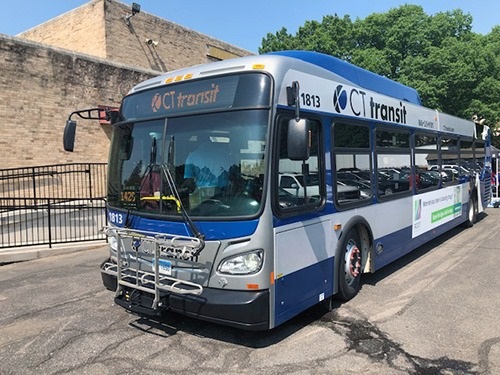 Governor Ned Lamont (D) first proposed creating CTpass in early 2021 as part of ongoing efforts to support the workforce development and job growth needs of the state. The state legislature ultimately approved the initiative as part of the 2022-2023 biennial state budget that the governor signed into law in June 2021.

“This is an innovative way for private employers, schools, job training service providers, social service providers, and other organizations to increase access to Connecticut’s bus and rail system,” Gov. Lamont noted in a statement. “Affordable transportation to workforce training, educational programs, and employment continues to be one of the largest impediments for individuals with low incomes, and this program seeks to address those needs.”

CTpass is similar to the state’s U-Pass CT program, launched in 2017 as a collaboration between the Connecticut DOT, UConn, and the Connecticut State Colleges and Universities system, and enables students enrolled in the state’s public institutions of higher education to have unlimited use of Connecticut’s rail and bus systems. CTpass expands this concept, providing more organizations – including privately operated firms – with the ability to participate.

State departments of transportation provide critical fiscal support to transit systems across the country. According to the American Association of State Highway and Transportation Officials “Survey of State Funding for Public Transportation” Final Report 2021, state DOTs invested $20.8 billion in public transportation, compared to the federal investment of $11.3 billion.

Recently, the Maryland Transit Administration – a division of the Maryland Department of Transportation – recently unveiled a draft of its Statewide Transit Plan designed to provide a “roadmap” for a “comprehensive, connected transit system” for current and future riders. The agency is accepting public feedback on the draft of this plan through February 18.

Meanwhile, the Oklahoma Department of Transportation, in partnership with the Oklahoma Transit Association, issued the state’s first-ever public transportation plan in October 2021: a plan that seeks to unite urban and rural transit services by laying out mobility priorities for the next 20 years.

“With rapidly increasing mobility needs in urban and rural parts of the state, public transit planning has never been more important in Oklahoma,” noted Tim Gatz, Oklahoma’s secretary of transportation and executive director of the Oklahoma DOT.

“This plan contains the first detailed study of the projected transit needs of our communities and begins to explore the changes and resources that may be necessary to modernize services and meet future demand,” he said.