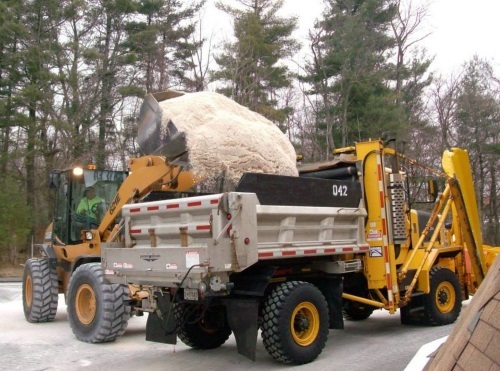 MDE has been working for several years with state agencies and local jurisdictions on new salt application strategies, including use of improved weather forecasting, using the right amount of salt, targeting roads in most need of treatment, using brine to reduce overall salt usage and increasing training for employees and contracted equipment operators.

The agency noted that Maryland DOT’s State Highway Administration (MDOT SHA) has used those and other strategies over the past five years to reduce its overall salt usage up to 50 percent.

MDOT SHA has moved to using salt brine – a liquid solution that is 22 percent salt and 78 percent water – before, during, and after winter weather events.

MDOT SHA has also designated salt brine-only routes for the duration of winter storms, resulting in less overall salt use when compared to routes where only rock salt is used. The agency pre-wets rock salt with salt brine to reduce the “bounce and scatter” effect of salt solids ricocheting off the highway.

MDOT SHA also works with weather forecasters to develop a treatment plan and employs more than 100 mobile infrared sensors at key locations, along with mobile sensors, to determine conditions and target its storm deployment – greatly contributing to salt reduction efforts.

“[We] congratulate and thank the Maryland Department of Transportation for leading by example when it comes to reducing the use of road salts that can threaten public health and our environment,” said Ben Grumbles, Maryland’s secretary of the environment, in a statement.

While sodium chloride or salt is effective, relatively inexpensive, readily available, and easily stored, it can destroy a soil’s structure and cause erosion, damage and kill vegetation, while contributing to the corrosion of metal bridges and motor vehicles, MDE said.

It can also seep into groundwater and run off into surface waters, contaminating wildlife habitat and potentially affecting drinking water, it added.

The agency noted it has increased monitoring for sodium chloride in the environment to gain information to help develop restoration plans. However, MDE noted that once salt has entered the environment there is no effective way to remove it. Thus, the best solution is a widespread, decreased use of road salt, it noted.