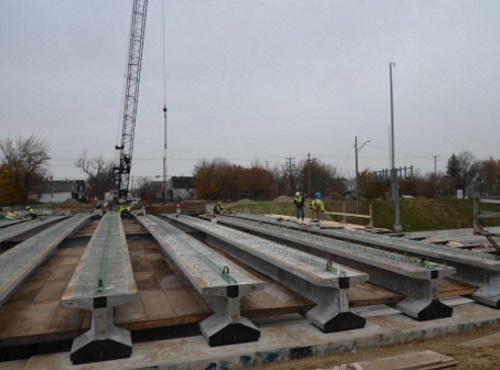 To reduce the cost of corrosion and long-term maintenance expenses, the Michigan Department of Transportation is broadening its use of carbon fiber structural material on bridges statewide.

“Rusting of steel elements is the leading cause of deterioration in our bridges. Since carbon fiber is non-corrosive, we are eliminating that potential for damage,” explained Matt Chynoweth, Michigan DOT’s chief bridge engineer, in a statement. “Using a material that will not corrode is a real game-changer.”

Paul Ajegba, Michigan DOT’s director, added that one of the ultimate goals in expanding the use of carbon fiber is to build bridges that last a century with minimal maintenance.

Ajegba noted that Michigan DOT has been collaborating with Lawrence Technological University or LTU in Southfield, MI, on the use of carbon fiber reinforced polymer materials in concrete bridge beams since 2001 – research now moving from the lab into the field.

For example, Michigan DOT is currently building two bridges with carbon fiber reinforced beams as part of its massive I-94 modernization project in Detroit.

Michigan DOT’s joint research with LTU included subjecting carbon fiber reinforced beams to 300 freeze-thaw cycles, combined fire/loading events, severe weather, and other trials. Now, that joint research team believes they have the information and specifications they need to predict how carbon fiber reinforced beams will perform under a variety of real-world conditions, as well as design tools for future bridge projects.

The agency also noted that the Research Advisory Committee of the American Association of State Highway and Transportation Officials named its joint carbon fiber work with LTU as one of the top 16 research projects of 2020 – work that also led to the development of new MDOT and AASHTO design specifications.

The agency said steel is prone to corrosion and deterioration under assault from extreme temperatures, water, and deicing chemicals – conditions all too common in Michigan. Thus, preventing corrosion and repairing damaged areas requires time and money and can limit the lifespan of bridges, Michigan DOT said.  By contrast, carbon fiber strands have a tensile strength comparable to steel yet resist corrosion and require less maintenance over time.

However, a factor limiting the deployment of carbon fiber bridge beams is price, as carbon fiber elements can cost as much as three to four times more than comparable steel elements. However, based on Michigan DOT and LTU’s joint research, as carbon fiber reinforced beams should last much longer than steel, they may prove to be cheaper over the long run.

“We’ve calculated the ‘break-even point’ to be about 22 years based on life cycle maintenance,” explained Michigan DOT’s Chynoweth. “But since the data points only go back about 20 years, this is a theoretical estimate.”