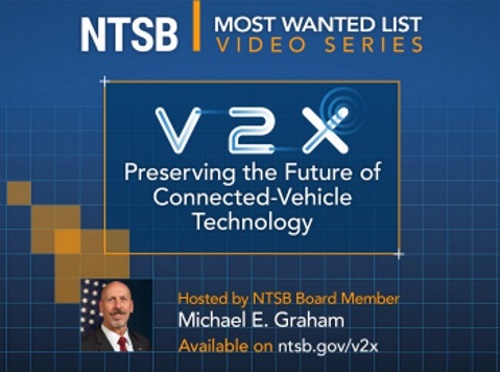 [Above image via the NTSB]

The series interviews experts from government, industry, and academia about everything from reasons for the “scarce deployment” of V2X technology to the impact of recent actions by the Federal Communications Commission to limit the spectrum available for transportation safety.

“State DOTs are interested in types of advanced technologies like V2X because they collectively hold the potential to reduce crashes by as much as 80 percent – we are not aware of any other approach that even comes close to promise of these technologies,” he said.

Marler – appointed by the American Association of State Highway and Transportation Officials to chair its Committee on Transportation System Operations in October 2020 – stressed that the FCC’s actions in November 2020 to reduce spectrum available for transportation safety is a major factor impacting the deployment of V2X technology.

“Connectivity is very critical to any future transportation framework,” he added. “But state and local research efforts have been constrained by uncertainty, in part by the USDOT not mandating connected vehicle technology. The FCC recent actions on 5.9Ghz spectrum have only added to that uncertainty.”

Hibbard noted that Georgia DOT became involved in V2X technology research as part of the Signal Phasing and Timing or SPaT Challenge initiated by the National Operations Center of Excellence or NOCoE in 2017.

NOCoE – a partnership between AASHTO, the Institute for Transportation Engineers, and the Intelligent Transportation Society of America, with support from the Federal Highway Administration – said its SPaT challenge encouraged state and local agencies to develop traffic signal phasing and timing broadcasts for at least 20 signalized intersections in each of the 50 states by January 2020.

[The Louisiana Department of Transportation and Development explains in the video below how traffic signal phasing and timing can improve both safety and travel efficiency for roadway users.]

“We launched a pilot effort by mid-2018 at 50 locations, but we realized that this was just a drop in the bucket – for Georgia has over 9,000 traffic intersections,” Hibbard explained.

“We realized that we were part of ‘chicken and egg’ situation,” he added. “We are big believers in this technology – it improves safety and prevents crashes. But this technology needs to be both in the vehicles and at the roadside.”