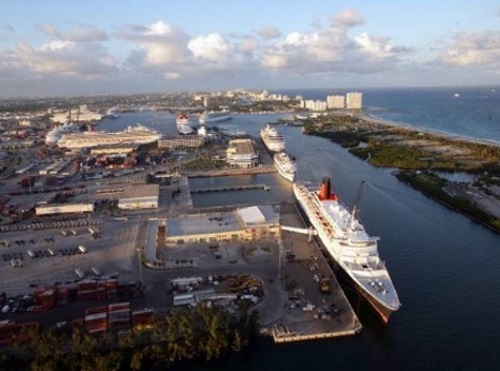 The U.S. Army Corps of Engineers plans to direct $22.81 billion in fiscal year 2022 supplemental funding – provided by the Infrastructure Investment and Jobs Act or IIJA signed into law in November 2021 and the 2022 Disaster Relief Supplemental Appropriations Act – towards port, waterway, and “climate mitigation” infrastructure projects.

[Above photo by the USACE]

“The Army will work with community partners to leverage these funds for investments that strengthen national supply chains through our commercial navigation mission,” noted Michael Connor, assistant secretary of the U.S. Army for Civil Works, in a statement. “[We plan] to help communities impacted by climate change to increase their resiliency, advance environmental justice, and invest in communities that have too often been left behind.”

The USACE said it plans to use the more than $17 billion provided by the IIJA to maintain existing maritime infrastructure plus repair damage and dredge channels in response to floods and coastal storms.

Through this investment in water resources infrastructure, over $5 billion will help improve community resilience in the face of global climate change and $3.936 billion will address commercial navigation improvements at coastal ports and on the inland waterways.

Of the $5.711 billion in supplemental funds from the 2022 Disaster Relief legislation, $100 million is designated for studies of proposed projects in the four states that suffered damage from Hurricane Ida in 2021 – Louisiana, New Jersey, New York, and Pennsylvania.

That money will also fund 11 feasibility studies, plus the preconstruction engineering and design for six projects, USACE noted.

That appropriations package also provides $3 billion for construction of qualifying flood and storm damage reduction, including shore protection, projects, with $1.5 billion toward projects in four states that suffered from Hurricane Ida.

Additionally, the 2022 appropriations law provides $868 million to rehabilitation/repair projects along the Mississippi River and its tributaries, including $500 million for Louisiana projects for building flood/storm damage reduction infrastructure.