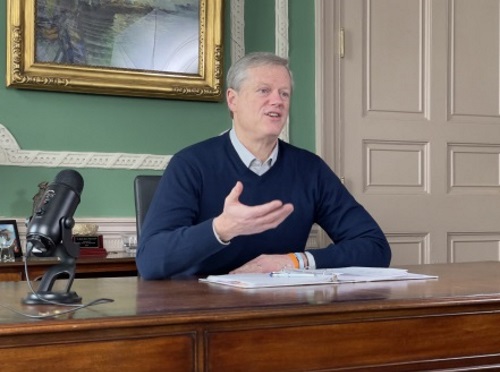 Governor Charlie Baker (R) (seen above) is planning to file legislation seeking $200 million in Chapter 90 funding to help all 351 cities and towns in Massachusetts improve transportation infrastructure and address needs within their local communities.

[Above photo by the Massachusetts Governor’s Office]

Through the Chapter 90 program, the Massachusetts Department of Transportation reimburses cities and towns for costs incurred for eligible transportation projects, awarding funding via a predetermined formula that includes factors such as population, road miles, and employment.

The governor’s funding request complements a $31.5 million increase in unrestricted local aid that he plans to include within his fiscal year 2023 budget proposal.

“The budget proposals we have filed throughout our time in office kept our promise to cities and towns to increase local aid funding consistent with the growth in state tax revenue, and we have consistently filed for additional Chapter 90 funds to make critical improvements for local roads and bridges,” Gov. Baker noted in a statement.

He added that his administration has released a total of $1.56 billion in funding through the Chapter 90 formula since he took office in 2015 and, if approved by the state legislature, this most recent request would bring the total to $1.76 billion.

“The Chapter 90 funding program is a lifeline for municipalities as they manage and maintain their roadways and bridges,” noted Jamey Tesler, MassDOT secretary and CEO.

“[That has] not only provided a generational investment directly to communities but helped repair and modernize the transportation network of the Commonwealth,” Tesler said.