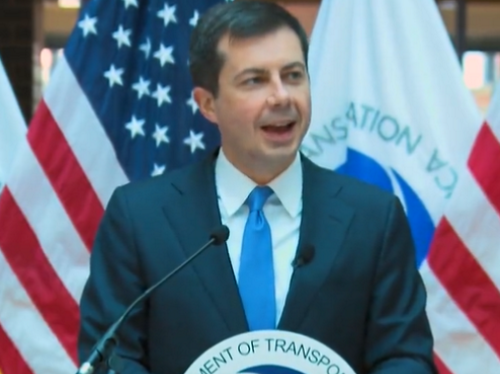 The U.S. Department of Transportation introduced a new comprehensive National Roadway Safety Strategy or NRSS during a press event at the agency’s Washington D.C. headquarters on January 27.

USDOT Secretary Buttigieg (seen above) said during that event that the NRSS provides “concrete steps” for the agency to address an “alarming rise” in roadway fatalities via “systemic changes” to prevent these “tragic and avoidable deaths and serious injuries.”

[Above image via the USDOT]

He added that the NRSS is but the “first step” in working towards USDOT’s long-term goal of reaching zero roadway fatalities.

“We cannot tolerate the continuing crisis of roadway deaths in America,” Buttigieg said in a separate statement. “These deaths are preventable. We will work with every level of government and industry to deliver results, because every driver, passenger, and pedestrian should be certain that they’re going to arrive at their destination safely, every time.”

Buttigieg made the same points in a speech at the 2021 American Association of State Highway and Transportation Officials annual meeting in San Diego that highlighted the impending rollout of the NRSS.

He also referred to AASHTO and state DOTs as the “tip of the spear” in terms of improving highway safety during his remarks at the USDOT’s press event.

USDOT also noted that, as part of the NRSS, it is adopting a “Safe System Approach” to prevent vehicle crashes as well as the fatalities and injuries associated with those crashes.

[Editor’s note: AASHTO’s board of directors has also recognized that a “comprehensive, multidisciplinary, and multi-partner approach” is required to improve roadway safety for all road users in order to reduce roadway fatalities and injuries. That is why it adopted Toward Zero Deaths as its safety plan in 2014; a plan developed with seven other multi-disciplinary organizations that is consistent with the “safe systems” approach USDOT adopted for its NRSS.]

USDOT noted that it would use a five-pronged “safety model” as part of that approach: focusing on safer people, safer roads, safer vehicles, safer speeds and post-crash care.

Some of the key actions USDOT expects to take in regards to the NRSS include:

Polly Trottenberg, USDOT’s deputy secretary, spearheaded development of the NRSS and said it seeks to “focus” all of USDOT’s resources, authorities, and expertise “to combat the tragic number of fatalities and serious injuries we see on U.S. roadways” with help from transportation industry stakeholders.

AASHTO expressed its support for the USDOT’s NRSS as state DOTs are also concurrently working to address the “alarming increase” in roadway fatalities over the last two years, according to National Highway Traffic Safety Administration data.

NHTSA noted in October 2021 that an estimated 20,160 people died in motor vehicle crashes in the first half of 2021, up 18.4 percent over 2020. That is largest six-month increase ever recorded in the Fatality Analysis Reporting System’s history, NHTSA noted in a statement at the time, with the agency adding that the total number of projected fatalities is the largest six-month total since 2006.

“The number one priority for state departments of transportation is safety, but even still, we’ve seen an unacceptable increase in roadway fatalities during the pandemic,” said Jim Tymon, AASHTO’s executive director, in a statement.

“We also believe that the increased funding for safety in the Infrastructure Investment and Jobs Act present opportunities to leverage resources to make a difference in addressing these unacceptable fatalities,” Tymon added. “States stand ready to work with all stakeholders to more holistically and adequately address this crisis.”