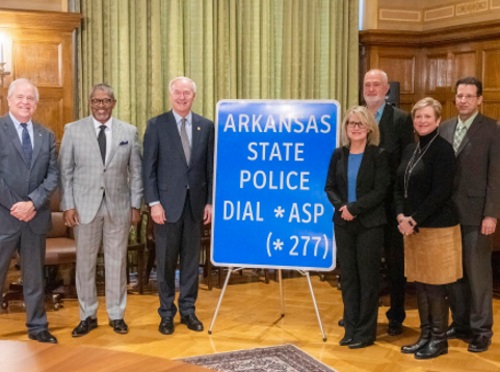 [Above photo via the Arkansas DOT]

“This project has proven to be a collaborative effort by many, all working together, to help make traveling Arkansas a safer experience and better serve the citizens and our visitors,” noted Lorie Tudor, Arkansas DOT director, in a statement.

Using a four-digit speed dial feature, *ASP (*277) is now available on any AT&T, T-Mobile, or Verizon cellular phone operating in Arkansas, the agencies said. The nationwide standard 9-1-1 remains the primary telephone number for emergency needs, they noted, with calls routed through the 9-1-1 network always answered first as they take priority over the non-emergency *ASP calls.

“The types of calls we anticipate receiving include those from stranded or lost motorists,” added Colonel Bill Bryant, director of the Arkansas State Police. “Additionally, we encourage callers to use the *ASP speed dial for reporting suspicious activity they may notice on the highway or safety concerns related to dangerous driving of others.”

The Arkansas DOT is responsible for making information about *ASP available to motorists where it is most needed – along the 16,000 miles of interstates and state highways crisscrossing Arkansas.

The Arkansas DOT is producing more than 200 large blue reflective metal signs that display the *ASP wireless phone instructions. The agency is erecting them at all interstate highway entry points for vehicle traffic entering the state, at all interstate interchanges within the state and posted alongside several of the more heavily traveled U.S. and Arkansas highways inside the state’s borders.

The Division of Arkansas Tourism estimates that during 2019 more than 36 million people traveled on Arkansas highways as a means for leisure or business transportation.

“The Department of Public Safety is proud of the collaboration between state agencies and private wireless carriers to provide motorists a simple one-touch connection with the Arkansas State Police, regardless of their location when the call is made,” added Jami Cook, Arkansas DPS secretary.

Her agency noted that cellular phone customers with wireless services provided by companies other than AT&T, T-Mobile, or Verizon should check with their provider to determine whether the *ASP speed dial service is available on their network. Also, *ASP is not designed to function from a landline telephone.