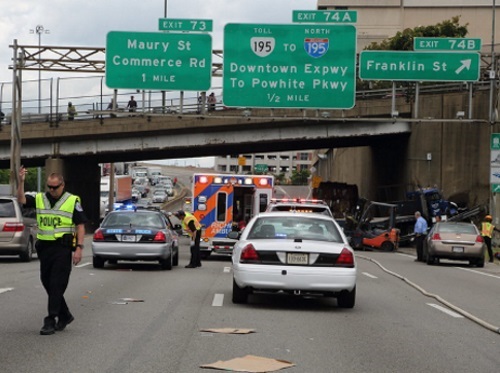 [Above image by the Virginia DOT]

The agency noted in a statement that nine-month fatality figure the highest of any year since 2006.

“People make mistakes, but human mistakes don’t always have to be lethal. In a well-designed system, safety measures make sure that human fallibility does not lead to human fatalities,” noted Pete Buttigieg secretary of the U.S. Department of Transportation, in a separate statement.

“That’s what we will be doing for America’s roads with the National Roadway Safety Strategy and the safe system approach that it embraces,” he added.

However, when overlaid with vehicle miles traveled or VMT data collected by the Federal Highway Administration, the overall crash fatality rate remained relatively unchanged in 2021 versus 2020 – with fatality rates in the second and third quarters of 2021 actually declining compared to the same two quarters in 2020.

According to FHWA data, VMT in the first nine months of 2021 increased by about 244 billion miles or an 11.7 percent versus the same period in 2020.

NHTSA’s early estimate report also provides the first look at state-level traffic fatality estimates during the pandemic. Compared to 2020, the agency projected that during the first nine months of 2021, fatalities increased in 38 states, remained flat in two states, and decreased in 10 states and the District of Columbia.

Jim Tymon, executive director of the American Association of State Highway and Transportation Officials, noted that the number one priority for state departments of transportation is safety, “but even still, we’ve seen an unacceptable increase in roadway fatalities during the pandemic.”

State DOTs also believe that the increased funding for safety in the $1.2 trillion Infrastructure Investment and Jobs Act presents opportunities to leverage resources to make a difference in addressing these unacceptable fatalities, he added.

“States stand ready to work with all stakeholders to more holistically and adequately address this crisis,” Tymon said.