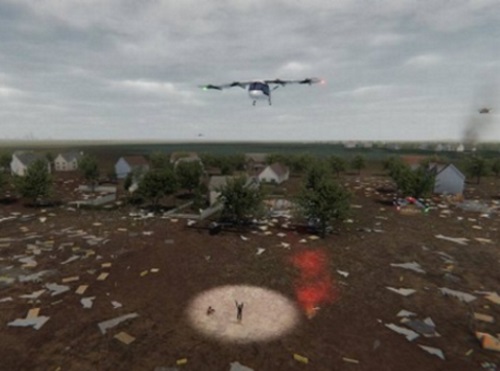 Drones offer the potential to help provide disaster relief, assist in firefighting missions, and provide supplies to hard-to-reach areas during emergency events: and NASA, through its Advanced Air Mobility or AAM project, plans to map out those capabilities in further detail.

[Above image via NASA]

NASA noted in a blog post that it has already engaged in a number of field missions with drones in support of wildfire suppression efforts in California.

In 2021, NASA said its AAM project sent drones into several California fires to collect thermal data about the fire for firefighting teams and deployed tools to track the aircraft in real-world settings.

NASA drone pilots also assisted the California Air National Guard in its use of remote-piloted MQ-9 aircraft equipped with infrared cameras to fly above fires and “see” through its smoke and ash.

Several projects under the AAM mission are working on different elements to help make drones a reality in emergency operations, NASA added – including work on automation, landing and take-off locations like “vertiports,” and aircraft designs, and airspace management to keep everyone safe while flying in the skies together.

NASA said its AAM vision is to map out a safe, accessible, and affordable new air transportation system alongside industry partners and the Federal Aviation Administration. Once developed, passengers and cargo will travel on-demand in innovative, automated aircraft across town, between neighboring cities, or to other locations typically accessed today by car.

Partners in NASA’s drone testing efforts include state departments of transportation. In May 2021, five state and local governmental entities – including three state DOTs – signed agreements with NASA to study how cargo-carrying drones and passenger-carrying air taxis can best be included in local and regional civic transportation plans.

Those five entities and NASA plan to engage in “cooperative activities” through summer of 2022, which includes a series of at least four workshops as part of NASA’s Advanced Air Mobility or AAM mission.

That mission seeks to help create “safe, sustainable, accessible, and affordable” air travel for emerging aviation markets at the local and regional level using “revolutionary new aircraft” such as electric vertical take-off or “eVTOL” aircraft – an aircraft design NASA began testing in June 2021 with the help of the Minnesota DOT.