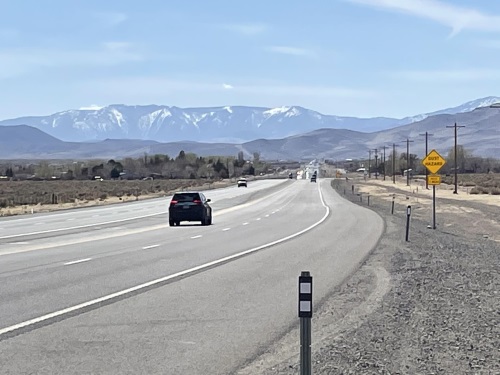 Now through summer, the Nevada Department of Transportation will be closing stretches of U.S. 50 between State Route 341 and Chaves Road in Dayton, NV, as it installs of livestock fencing to reduce vehicle-horse collisions.

The agency said in a statement that it is installing the four-foot high livestock fencing on both sides of the highway largely along rural roadway stretches, not in high-density residential and business areas. The Nevada DOT is also placing roadway lighting on the highway at the end of each fenced section for enhanced visibility for motorists.

Nevada DOT also noted that approximately 35 horse-related crashes occur across Nevada every year. Between 2017 and 2019, Nevada DOT said 27 horse-related crashes occurred in areas where it is installing the new U.S. 50 fencing. The agency added that motorists who hit horses are more than twice as likely to be injured or killed compared to drivers who collide with a deer.

State departments of transportation across the country continue to work on ways to reduce animal-vehicle collisions and construct safer animal roadway crossing alternatives.

For example, a 2019 Pew Report chronicled the efforts undertaken by states to boost safe passage for wildlife around roadways, while at the same time improving motorist safety.

Nevada DOT was one of the state DOTs profiled in that report for its work with the Nevada Department of Wildlife to install nine safety crossings installed on Interstate 80 between Wendover and Wells and U.S. 93 north of Wells in the northeastern portion of the state.

That project – which garnered a 2019 Environmental Excellence Award from the Federal Highway Administration – covered wildlife overpasses with native soil and vegetation to replicate the natural environment, with roughly 60 miles of eight-foot-high fencing installed along both sections of the roadways redirecting and encouraging deer, mules, and other animals to use the crossing points.

More recently, the Colorado Department of Transportation and the Colorado Parks and Wildlife completed wildlife underpasses along a rural stretch of Interstate 25 between Colorado’s two largest cities, Denver and Colorado Springs, in October 2021.