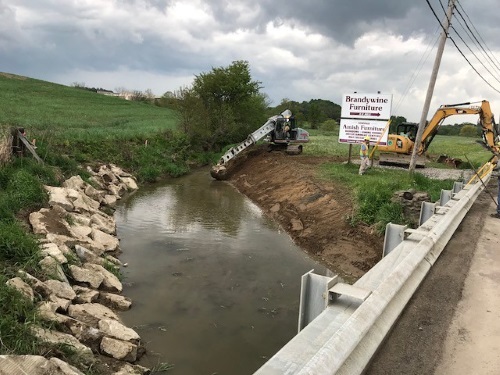 The American Association of State Highway and Transportation Officials submitted a seven-page letter on February 2 to the Department of the U.S. Army and the Office of Water Oceans, Wetlands, and Communities Division within the Environmental Protection Agency to comment on the latest proposed revisions to Waters of the United States or WOTUS regulations.

The foremost concern expressed by AASHTO in its letter focused on the “need to clarify the standards used for determining the jurisdictional status of roadside ditches” so that the latest proposed WOTUS rule changes “clearly excludes” the overwhelming majority of roadside ditches.

“Unlike previous iterations of regulations defining WOTUS for which the agencies extended the public comment period, this proposed rule makes numerous changes to pre-2015 definition of WOTUS, and relies on supporting documents including a 250-page Technical Support Document and 177-page Economic Analysis,” AASHTO emphasized. “But [it] does not give the public sufficient time to fully digest and understand the agencies’ proposal and submit comments.”

The debate over changes to WOTUS regulations spans several years. In September 2019, EPA and the Department of the Army – representing the U.S. Army Corps of Engineers – repealed and ended what they described as a “regulatory patchwork” that required implementing two competing sets of Clean Water Act rules, which created a regulatory burden across the United States, especially for transportation projects.

The EPA and Department of the Army published a proposed rule in February 2019 as part of the second step in this process – developing a new WOTUS definition that would “clearly define” where federal jurisdiction begins and ends in accordance with the Clean Water Act and Supreme Court precedent.

In that proposal, the agencies said at the time they would provide a “clear definition” of the difference between federally regulated waterways and those waters that rightfully remain solely under state authority.

EPA and the Department of the Army then published a final rule in April 2020 defining the scope of waters federally regulated under the Clean Water Act, while adhering to Congress’ policy directive to preserve states’ primary authority over land and water resources.

When that new final rule went into effect, it replaced the rule published in 2019 that formally repealed a regulatory effort initiated in 2015 to expand the WOTUS definition under the Clean Water Act.

However, the EPA and U.S. Army Corps of Engineers – via a broad environmental directive issued by President Biden in January 2021 – began an entirely new WOTUS revision process in November 2021, first to repeal the 2020-era rule and then to design a brand new WOTUS regulatory framework.

The constant back-and-forth changes to WOTUS regulations is the main concern of AASHTO and state DOTs, as it impedes the ability to effectively plan transportation projects.

“We caution that any final rule should truly be final, to the extent possible,” AASHTO said in its February 2 letter. “Frequent rule changes – especially of the magnitude characterizing the WOTUS definition – can be damaging to our members, because uncertainty has a substantial impact on transportation projects that often have a long lead time.”

AASHTO also expressed “concern” with the suggestion by the EPA and Department of the Army that an “anticipated second rule” would seek to “further refine” the test for WOTUS and “build upon the regulatory foundation” of the initial rule now being proposed.

“A second rule that does not focus solely on clearly defining WOTUS but instead introduces new concepts, standards, or requirements that go beyond the case law will increase the probability of confusion, additional lawsuits, and the need for additional changes in the future, further harming our members’ ability to plan for projects,” the organization said.