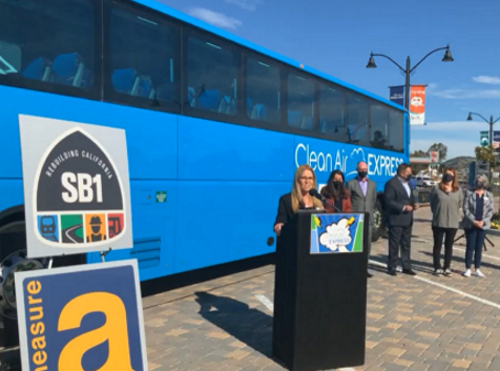 The battery electric bus features a 220-mile range, easily meeting the longest Clean Air Express round trip of 150 miles, noted Das Williams, chair of the SBCAG’s board of directors.

“We know that transportation is one of the largest contributors to greenhouse gas emissions in the United States. A switch to cleaner, quieter, and smoother public transit options is a switch in the right direction, one that is imperative for our future — for our children and neighbors,” Williams said in a statement.

“We see just how the zero-emission vehicle industry’s evolving technology is changing the game for long-range transportation options improving the efficiency, experience, and commuter benefits to save energy and the environment,” Williams added.

Caltrans covered $500,000 of the $850,000 sticker price for all-electric bus, re-charged at SBCAG’s Transit Facility in Goleta with 100 percent renewable electricity via a partnership with Central Coast Community Energy.

SBCAG assumed management of the Clean Air Express – created by the Santa Barbara Air Pollution Control District in 1990 – in 2001 and has since expanded the service by purchasing new buses, adding payment flexibility, installing wireless internet access on all buses, and modernizing the customer’s online experience.

A local sales tax measures supports the operational cost of the weekday commuter service, which eliminates over 400,000 vehicle miles traveled from the county’s roads every month, SBCAG said.

This clean bus deployment project comes on the heels of $6.1 billion zero-emission vehicle or ZEV fiscal support package proposed by Governor Gavin Newsom on January 26 to accelerate the state’s transition to ZEVs and “fight climate change” in the process.

That spending also dovetails with governor’s executive order issued in September 2020 requiring that all new cars and passenger trucks sold in California by 2035 must be zero-emission vehicles.