McGuinness Steps Down as INDOT Commissioner 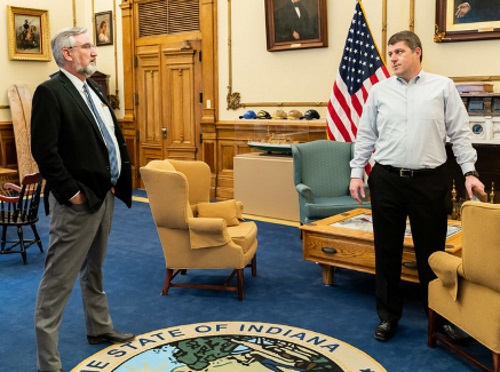 Joe McGuinness (seen above at right with Indiana Gov. Holcomb at left), commissioner of the Indiana Department of Transportation for the last five years, plans to step down from his position effective February 11 to become CEO of a new local government infrastructure-consulting firm.

[Above photo by the Indiana Governor’s Office]

“From day one, Commissioner McGuinness harnessed his local government experience and the many resources at INDOT to find innovative ways to expedite construction projects and create safer work zones all while finishing projects on budget and ahead of schedule whenever possible,” noted Governor Eric Holcomb (R) in a statement.

“Under his leadership, Indiana continues to offer a world-class infrastructure system, which remains a key engine to our economic growth and safety. Joe’s legacy is one Hoosiers can be proud of and will have long lasting positive impacts right here at the crossroads of America,” the governor said.

Prior to his appointment as INDOT commissioner in 2017, McGuinness was the mayor of Franklin, IN, for five years.

“It has been the honor of a lifetime to help the state embark on transformational projects that will have an impact on Hoosiers and Hoosier businesses for generations to come,” McGuinness said. “While we’ve worked to deliver projects on time and on budget, we’ve looked ahead for the state, and I leave behind an agency that is at the forefront of partnerships to explore new technology.”

Smith has been a deputy commissioner for INDOT since 2015, when he started overseeing the Greenfield district.

“Mike brought experience from the fast-paced demands of managing business growth to INDOT, where he has been involved in day-to-day work in a district, developed comprehensive fleet management plans, invested taxpayer money in the best technologies, and developed biennium budgets to maintain and build Indiana’s infrastructure,” Gov. Holcomb noted.

“That breadth and depth of experience and determination will serve residents and businesses well as we continue making the best use of dollars to provide a top-rated infrastructure network for Hoosiers and our guests,” the governor said.

Prior to joining INDOT, Smith worked as the district manager for Walmart, overseeing up to 10 stores in the Indianapolis area.