Pennsylvania to Invest $246M in Port of Philadelphia 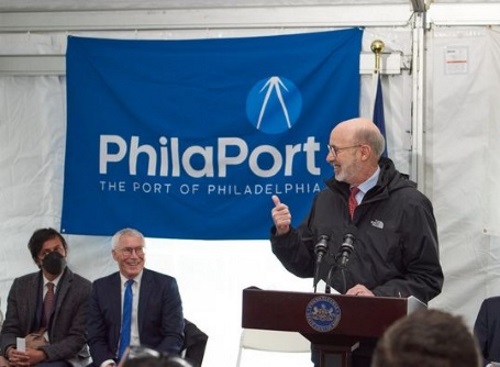 Governor Tom Wolf (D) (seen above at podium) announced plans to invest $246 million in state funds into the Port of Philadelphia on February 4 to continue the port’s modernization efforts and improve regional economic stability.

[Above photo via the Pennsylvania Governor’s Office]

That funding builds upon comprehensive $300 million Capital Investment Program at the Port of Philadelphia announced in 2016, the governor said.

“The port is an economic driver, not only in Philadelphia, but across the commonwealth,” Gov. Wolf noted in a statement. “The port supports jobs, encourages trade, and builds connections that help businesses and communities across Pennsylvania thrive. This new $246 million investment will help the port build on its success over the past few years and will help Pennsylvania build on our commonwealth’s economic success and job growth, too.”

In 2016, Governor Wolf announced his Port Development Plan to redevelop underutilized areas of the Port of Philadelphia by investing more than $300 million in the port’s infrastructure, warehousing, and equipment.

Critical infrastructure investments included the purchase and implementation of three new super post-Panamax cranes at the Packer Avenue Marine terminal, the building of two new warehouses, and the development of the Southport Auto Terminal, the first new port terminal in more than 45 years.

Since the implementing of its infrastructure improvement plan, the port achieved record-breaking cargo volumes, with a nearly 60 percent increase in freight container traffic.

“The need to strengthen and invest in infrastructure at our ports and throughout the supply chain has been thrown into sharp focus in recent months,” added Yassmin Gramian, secretary of the Pennsylvania Department of Transportation.

“PennDOT is proud to support the Port of Philadelphia to help improve the port and improve connections with the rest of our transportation network,” she said.