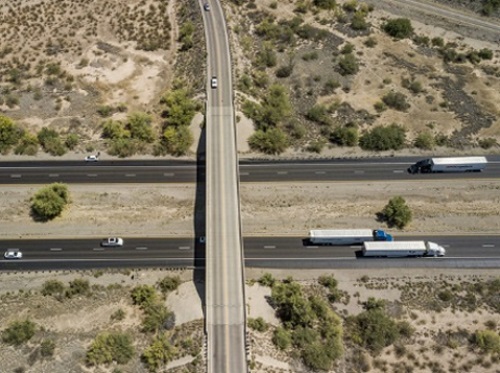 The Arizona Department of Transportation is the latest state agency to step up its support for broadband deployment – an effort mirrored by an increasing number of state departments of transportation as highway rights-of-way or ROWs are ideal fiber optic conduit installation sites.

The two agencies said in a statement that this strategic plan helped create the Statewide Middle-Mile Network, which aims to increase broadband service along 141 miles of I-17 and 60 miles along I-19 by early 2023 – with future broadband expansion planned for additional interstate and state highway mileage.

That strategic plan also identifies 726,357 households in Arizona within a five-mile radius of Arizona’s interstates and state routes that are either unserved or underserved in basic broadband connectivity – and the broadband deployment efforts along I-17 and I-19 should address the connectivity needs of 148,305 of those households, the two agencies said.

Broadband expansion along I-17 and I-19 and other interstate and state highways in Arizona will also help address public and private sector connectivity requirements, promote economic development, improve public safety, and encourage innovation in modern technology adoption and support environmental sustainability and quality of life for Arizonans, the agencies said.

The American Association of State Highway and Transportation Officials recently provided suggestions to the U.S. Department of Commerce on how to improve the role state DOTs play in broadband projects.

“By allowing broadband to be installed at the same time as other road improvement projects, we will reduce disruptions to residents, make better use of taxpayer dollars, and deliver economic opportunities to communities,” noted Pete Buttigieg, secretary of the U.S. Department of Transportation, in a statement at the time.