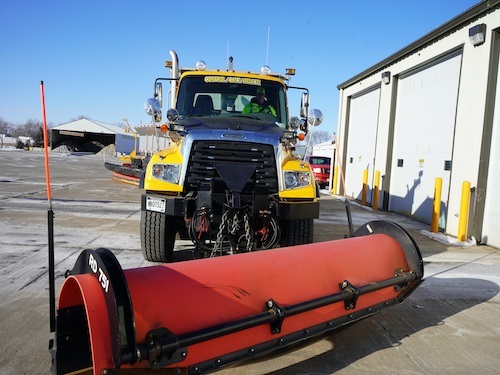 For those transportation professionals who believe engaging with the public is tantamount to poking a stick at sleeping dogs and hornets’ nests, “Snowprah Winfrey,” “Alice Scooper,” and “Hans Snowlo” insist it really is “Snow Big Deal.”

[Pictured above: South Dakota DOT’s Bruce Thiewes at the wheel of “Control/Salt/Delete,” a truck/tow/plow unit based in the Watertown, SD, area. Photo by the South Dakota DOT.]

Those are just some of the winning entries from citizens in “Name the Snowplow” contests that state departments of transportation have staged this winter. So far, at least seven states – Colorado, Connecticut, Michigan, Minnesota, North Dakota, South Dakota, and Vermont – are holding contests that have produced gems such as “The Scrape Gatsby,” “The Big Leplowski,” and “Snowbegone Kenobi.”

While the contests may seem frivolous, there is a serious purpose behind them, according to Jake Loesch of the Minnesota Department of Transportation.

“We’ve been able to have fun with a lighthearted contest but deliver an important message along the way about safety and driving tips when snowplow drivers are out working,” said Loesch, Minnesota DOT’s director of communications and public engagement.

The agency recently wrapped up its second-ever “Name a Snowplow” contest. After plowing through nearly 60,000 votes, the Minnesota DOT noted in a statement that it selected eight winners based on vote totals: Betty Whiteout; Ctrl Salt Delete; The Big Leplowski; Plowasaurus Rex; Scoop Dogg; Blizzard of Oz; No More Mr. Ice Guy; and Edward Blizzardhands.

The snowplow-naming contest trend appears to have begun in Scotland, where every year since 2006, annual public contests come up with names for what the Scots call “gritters,” which explains why “Gritney Spears” is a past winner.

Inspired by the Scots, the Michigan Department of Transportation held its first snowplow-naming contest in 2021, and Jeff Cranson – the agency’s communications director – said the public reaction proved tremendous.

“Levels of community engagement are always difficult to gauge, even if you have the resources to commit to truly scientific surveys,” he noted. “But I would say any [state] DOT initiative that prompts more than 15,000 responses, and counting, demonstrates a connection with some part of the audience.”

Sometimes, the connection is an unexpected one. When a South Dakota Department of Transportation crew took a snowplow to an elementary school as part of the contest, they did not know that the teacher was the daughter of a recently deceased South Dakota DOT snowplow driver. The connection resulted in warm memories for the teacher and a favorable article in the local newspaper.

“That’s why we do the contest,” said Julie Stevenson, South Dakota DOT’s strategic communications coordinator. “We use the contest as a way to share vital information. The ultimate goal is to humanize the snowplow operators.”

The New York State Department of Transportation aimed for a similar goal with its first snowplow-naming contest in 2021.

The winning name, “Howe’s Plow,” honors Dennis “Matt” Howe, a highway worker killed in a work zone in 2019. Now, one plow truck in each NYSDOT region will bear the name “Howe’s Plow” in his memory.

“It’s a fitting tribute to Matt’s memory that more than two-thirds of the votes cast in this contest went to Howe’s Plow,” said NYSDOT Commissioner Marie Therese Dominguez in a statement. “I hope it serves as a reminder to drivers to slow down and move over for the safety of the mothers, fathers, sons and daughters driving plows and doing other essential road work year-round to keep travelers safe.”

Other state DOTs are using snowplow-naming efforts in roadway safety campaigns. For example, amid a dramatic spike in snowplow strikes statewide in 2021, the Idaho Transportation Department launched a safety campaign centered on a caricature dubbed “Mr. Snowplow.”

“We were concerned with what we were seeing on the roads, with four hits in the span of just 10 days, so we began a short-term campaign to raise awareness,” explained Justin Smith, the agency’s public information officer for districts 5 and 6 in East Idaho, in a statement.

The campaign included multiple social media posts, press releases, interviews with local media, and a poem written by the spouse of one of the department’s snowplow drivers entitled “Mr. Snowplow, you are loved.” The poem went viral, with shares across the country and in Canada, and helped the agency’s safety campaign not only raise motorist awareness of snowplows and the dangers of passing them but reduced snowplow strikes dramatically as well.

Minnesota is just starting its contest this year. Minnesota DOT’s Loesch – who said his agency’s snowplow naming contest received more than 13,000 entries on its first day – would “strongly recommend” that other agencies hold such contests of their own.

“It’s a fun, simple way to engage the public that doesn’t present much risk to the agency,” he noted.