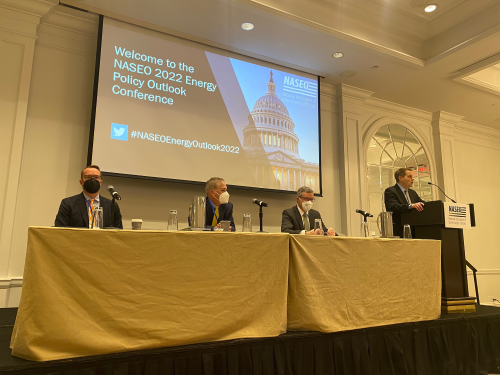 The National Association of State Energy Officials 2022 Policy Outlook Conference held in Washington D.C. February 8-11 focused in part on the ways states and federal agencies can work together to support transportation electrification.

Jim Tymon, executive director of the American Association of State Highway and Transportation Officials, participated in a panel discussion on February 10 regarding how states are ramping up support for the construction of a nationwide network of electric vehicle or EV chargers.

During the panel, Tymon noted that AASHTO has formed two inter-committee “working groups” to aid efforts by state departments of transportation around the country to support the Biden administration’s plan to build 500,000 EV chargers by 2030.

Those two AASHTO-led groups – the EV Inter-Committee Working Group and EV Practitioner’s Working Group – seek to address what Tymon called the “technical and logistical challenges” facing the administration’s plan to build 500,000 EV chargers within the next eight years.

He added that AASHTO addresses many of these issues in letters sent to the Federal Highway Administration on January 14 and January 28.

“Our members … understand that the [EV charger] buildout needs to be consistent and coordinated across the country in order to provide reliable and accessible service to all EV drivers,” Tymon explained in written remarks prepared ahead of the conference.

Moreover, while consistency is important, he said this build-out effort requires “flexibility” in certain areas. “For example, rural communities are going to have different needs than urban corridors,” Tymon emphasized. “In order for efficient implementation to occur, states will need the flexibility to implement plans that meet the needs of their communities, while keeping the bigger picture in mind.”

Tymon pointed out that collaboration between state agencies such as state DOTs and state energy offices “will be instrumental” in achieving the goals set out in the $7.5 billion EV program established by the $1.2 trillion Infrastructure Investment and Jobs Act signed into law in November 2021.

“AASHTO looks forward to doing what we can to support our members as they continue these successful relationships with their sister agencies and regionally with their peers across state lines,” he said. “No one sector can be successful on its own. This is a massive undertaking and continual communication – of challenges and concerns, best practices and lessons learned – will be key to the success of this huge implementation project.”