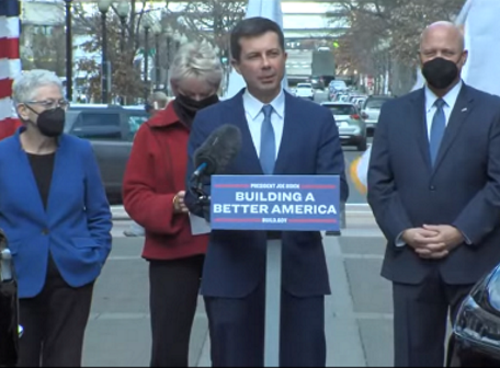 The U.S. Department of Transportation and U.S. Department of Energy formally launched a new National Electric Vehicle Infrastructure or “NEVI” formula program on February 10 that will provide nearly $5 billion over five years to help states create a national network of some 500,000 electric vehicle-charging stations.

[Above image via USDOT]

The two agencies added in a joint statement that they plan to launch a roughly $2.5 billion competitive grant program later this year to further foster the construction of EV charging locations nationwide, including in rural and underserved communities.

The NEVI formula program – established by the $1.2 trillion Infrastructure Investment and Jobs Act signed into Law in November 2021 – will provide $615 million to the states in fiscal year 2022, USDOT and DOE said.

To access those NEVI funds, states must submit an EV infrastructure deployment plan to the newly formed Joint Office of Energy and Transportation that describes how the state intends to use its share of NEVI program funds consistent with a 31-page guidance document issued by the Federal Highway Administration.

FHWA – the agency in charge of distributing NEVI program funding – explained that the overall EV charging plan is to build them out along Alternative Fuel Corridors nearly every state has designated over the past six years.