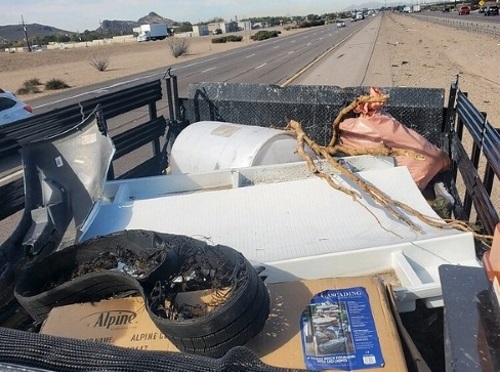 The Arizona Department of Transportation, along with its maintenance contractors, picked up 118,578 bags or 811 tons of trash along freeways in Maricopa County in 2021.

Unfortunately, the agency said that represents a continuing increase in litter collected from 250 miles of state highway in Maricopa County. During the past five years, Arizona DOT litter has steadily increased along state freeways in Maricopa County. In 2017, the agency said it picked up 80,442 bags of litter compared to the 118,578 bags in 2021 – a 47 percent increase.

“Drivers can help out by simply not littering,” said Mary Currie, who manages Arizona DOT’s Adopt a Highway programs, in a statement. “Don’t toss that burger wrapper, paper cup or cigarette butt out of the window. All of those seemingly small and insignificant items build up over time creating safety issues.”

Some of those safety issues include blockages of storm water drainage grates, sometimes preventing water from flowing freely to retention basins, drainage channels or pump stations. That can cause standing water to build in low-lying locations along freeways. Over time, litter also can negatively affect the operation of pumps that remove storm runoff along some Phoenix-area freeways, the agency added.

The Arizona DOT also recently wrapped up a litter collection effort along 25 miles of I-10 and I-19 in the Tucson area that removed 44,000 pounds of trash. That four-day effort involved 45 maintenance crews from as far away as Casa Grande and Nogales, the agency added in a separate statement.

For example, the North Carolina Department of Transportation said that by November 2021, its crews, contractors and volunteers collected more than 12 million pounds of litter from state roadways, surpassing the previous trash-collection record of 10.5 million pounds in 2019.

The Pennsylvania Department of Transportation specifically expanded its “routine” litter pickup operations statewide through the Labor Day holiday in 2021, especially on higher-traffic roadways where volunteer groups cannot safely pick up litter, in order to deal with increased trash accumulation along state roadways.

“Every dollar we have to spend on litter cleanup is a dollar we cannot invest in our system,” PennDOT Secretary Yassmin Gramian explained in a statement at the time – noting that her agency spends roughly $14 million annually on statewide litter removal efforts.

Minnesota DOT Opens Up Second Round of Freight Funding