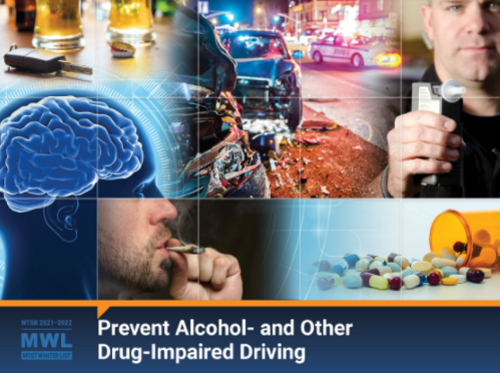 The National Transportation Safety Board said a new National Highway Traffic Safety Administration study released on February 1 validates an NTSB safety recommendation made in June 2013 that lowering the blood alcohol concentration or BAC limit from .08 to .05 will save lives and increase road safety.

[Above graphic via the NTSB]

NTSB said NHTSA’s new report found that traffic deaths decreased in Utah after the state enacted a law to lower its impaired driving legal limit to .05 in 2018. According to the study, Utah’s drop in fatal crashes and its fatality rate – down 19.8 percent and 18.3 percent, respectively – represented a “significant improvement” compared to the rest of the United States in 2019, the year following Utah’s implementation of its lower BAC limit.

“For almost a decade, NTSB has advocated for lowering the BAC limit to reduce the number of impairment-related crashes,” explained NTSB’s Tom Chapman in a statement. “This study’s real-world results further prove what we already knew – lowering the BAC limit saves lives in the United States. The hope is that other states will see these results and join Utah in passing legislation for .05.”

A previous NTSB study, conducted in 2017, estimated that lowering the BAC in every state would likely reduce the number of fatal alcohol crashes by 11 percent, potentially saving about 1,800 lives a year and preventing thousands more life-altering injuries.

NHTSA added in a statement that alcohol-impaired-driving arrests did not climb sharply after Utah’s lower BAC limit law went into effect. The agency noted that 8,828 statewide arrests made for drunk driving in 2016 – the last full year before Utah voted to change the law – declined to 8,512 arrests under the new BAC limit in 2019.

Meanwhile, state departments of transportation across the country remain engaged in a variety of efforts to reduce impaired driving – whether from alcohol or drugs – along with initiatives to boost seat belt use, reduce cell phone use while driving, and other beneficial safety practices.

The Pennsylvania Department of Transportation, for example, recently launched a joint initiative with the Pennsylvania State Police on February 15 to get motorists statewide to “slow down, pay attention, never drive impaired, and buckle up.”

In addition, in November 2021, the Governors Highway Safety Association – in partnership with Uber – awarded state DOTs in Colorado, Connecticut, Maryland, New Mexico, and Texas a total of $95,000 in grant funds and Uber ride credits to help prevent impaired driving during the 2021 holiday season.

Now in its fourth year, the program encourages people who consume alcohol or other impairing substances to use ride-hailing services instead of putting themselves and others on the road at risk by getting behind the wheel.