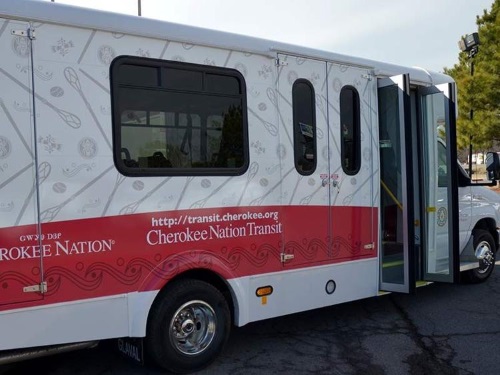 The Federal Transit Administration is opening up an $8.75 million pool of fiscal year 2022 grants to support the transit needs of American Indian Tribes and Alaska Native villages, groups, or communities.

[Above photo via the FTA]

FTA said those grants – issued via its Tribal Transit Program – would help support tribal transportation needs, including those of older adults, people with disabilities, and youth in rural areas.

The agency noted it would evaluate applications for those grants based on criteria outlined in its Notice of Funding Opportunity, including how projects seek to improve the quality of life for the tribe and surrounding communities. Applications for this pool of grant funding are due by May 25.

FTA added that the $1.2 trillion Infrastructure Investment and Jobs Act – signed into law in November 2021 – authorizes $45.8 million in competitive funding over five years for tribal transit needs; an increase of nearly 83 percent from previous funding levels.

“For residents of Tribal and Alaska Native lands, transit is a lifeline,” noted FTA Administrator Nuria Fernandez in a statement. “This funding opportunity will improve public transportation connections to healthcare, jobs, education, and other resources in communities that have been historically underserved.”

Roger Millar – secretary of the Washington State Department of Transportation – noted that tribal transit is often a “critical link” between rural areas and essential services for tribal members as well as the public.

“Still, the first- and last-mile connection to tribal transit can be a dangerous challenge for riders,” he explained to the AASHTO Journal.

Millar – who serves as the American Association of State Highway and Transportation Officials 2021-2022 vice president as well as the chair of AASHTO’s Council on Public Transportation – added tribal areas often have high pedestrian fatality rates.

“Along with regular federal apportionments and other state grant programs, we’re investing in safe first- and last-mile connections to tribal transit,” said Millar. “As just one example of how Washington state is working to address pedestrian safety issues, with a $495,000 state grant we’re enhancing pedestrian facilities connecting to Yakama Nation bus stops.”