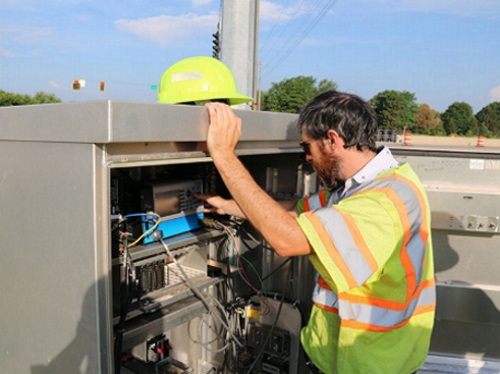 Researchers at Purdue University, in collaboration with the Indiana Department of Transportation, recently unveiled a new wireless communication device that could help save lives at high-speed traffic signals.

According to the Federal Highway Administration, two million crashes occur annually at intersections with traffic signals, leading to hundreds of thousands of injuries and more than 3,000 fatalities.

“To reduce crashes, the key idea is to provide dilemma-zone protection,” explained Jijo Mathew, on the Purdue researchers on the project.

“One would think yellow time can be extended; however, drivers tend to adapt to this, resulting in lower probabilities of stopping,” he said in a statement.

“The practice for actuated intersections – where timing is influenced by sensors – is to use green extensions, where the green time is extended for a certain period when a vehicle is present,” Matthew added. “Although this reduces the exposure of vehicles to the onset of yellow, this can go only for so long.”

He pointed out that a driver makes the decision to stop at a traffic signal or continue through it at the onset of the traffic signal turning yellow. Matthews noted that a section of roadway upstream of an intersection, known as the “dilemma zone,” is an area where a vehicle can neither stop safely nor clear an intersection at its present speed.

To that end, the Purdue-Indiana DOT sensor-based device extends green time or indicates yellow early as necessary to ensure safety and efficiency to the next intersection on a 0.1-second basis.

The system considers the trajectory of each vehicle relative to a predetermined time of when the green would end. If there is enough time to spare, the technology extends the green signal until the vehicle clears the intersection. However, when there are other vehicles competing for green time on other movements, the system triggers an earlier yellow signal, before the vehicle enters the “dilemma zone” for a safe stop.

The technology uses wireless communication devices placed at traffic signals and in vehicles, all connected through a specialized signal controller, to enable safer – and cheaper – transit through the “dilemma zone,” noted Howell Li, Purdue’s principle researcher on the project.

“Infrastructure sensors have a fixed range, are expensive, may require intrusive installation on existing infrastructure, and need routine maintenance to ensure proper operation,” he pointed out. “And most sensors do not detect vehicles continuously one mile away to adjust timing changes, such as when the onset of yellow occurs.”

“During my time working at the Indiana DOT, I have only been aware of conceptual-use cases involving onboard vehicle communication technology integrating with live traffic signal control,” he said.

“[This] new technology moves this integration beyond the merely conceptual,” Platte stressed. “This work provides an implemented real-world use case that addresses an important safety concern, among other applications.”