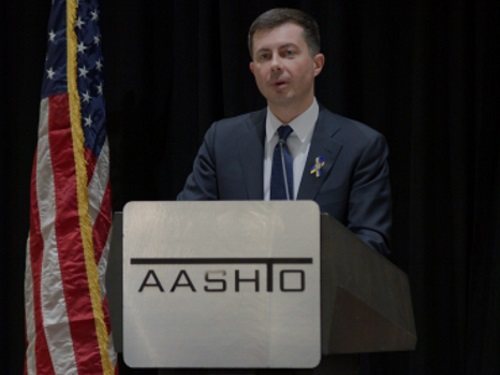 Pete Buttigieg (seen above), secretary of the U.S. Department of Transportation, believes that while the “hard part” of passing the $1.2 trillion Infrastructure Investment and Jobs Act or IIJA “is now behind us, the really hard part is ahead of us: implementation.”

Speaking during the keynote luncheon at the American Association of State Highway and Transportation Officials 2022 Washington Briefing, Buttigieg said USDOT will be looking to state departments of transportation “as our primary partners” to deliver the full value of the IIJA.

“How do we deliver that much value? In some places, the greatest value will be in what does not happen – as in traffic crashes that do not take place,” he explained.

“We in the department are working with urgency to make all this [IIJA] funding available to states, territories, tribes, and localities, but it is not about the short term,” Buttigieg stressed.

“Though we are moving swiftly, this is about improving infrastructure for decades to come,” he added. “We only get to do this once in a generation.”

[Editor’s note: Buttigieg also extrapolated on USDOT’s IIJA implementation vision during his testimony before the Senate’s Environment and Public Works committee during a March 2 hearing.]

Buttigieg noted that many of the approaches to improving the U.S. transportation system with IIJA funds “will not be top down.” Instead, they will be “bottom up” solutions driven by states and local governments, among others.

In addition to his keynote, Buttigieg also met with the state DOT CEOs gathered at the Washington Briefing privately, where they held more in-depth discussions on issues such as IIJA implementation, equity, the federal/state/local partnership, and how to improve communication with the public about how the projects state DOTs deliver improve communities nationwide.

“We are looking for state partners to squeeze every drop of value out of these [IIJA] funds,” Buttigieg emphasized. “Very few in transportation have an opportunity like the one we have now – this is an incredible level of responsibility, a once-in-a-generation opportunity to reshape our country one state at a time, one community at a time.”