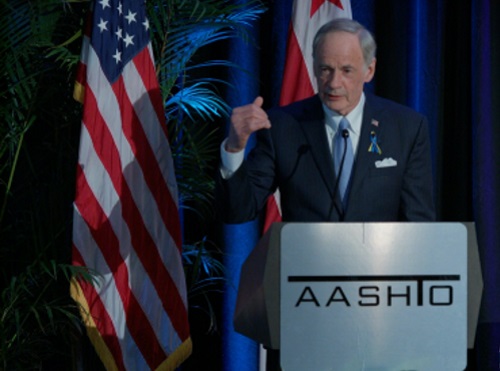 Implementation of the $1.2 trillion Infrastructure Investment and Jobs Act or IIJA, signed into law in November 2021, is now a key focus of Congress, according to the leadership of transportation committees within the Senate and House of Representatives.

Those leaders also stressed at the American Association of State Highway and Transportation Officials 2022 Washington Briefing that state departments of transportation will play a critical role in the successful implementation of the IIJA.

“State DOTs are critical to achieving our shared transportation objectives in this country,” explained Sen. Tom Carper, D-Del., (seen above) chairman of the Senate’s Environment and Public Works committee, at the briefing. “Thanks to the IIJA, states will be in a better position to build and maintain roads, reduce transportation emissions, and improve safety.”

However, he stressed that while it is “fine” to come up with new and expansive transportation ideas, “implementation of those ideas is the hardest part. That is why we must implement the IIJA to make a real and lasting impact on people’s lives.”

Sen. Shelley Moore Capito, R-W. Va., the ranking member on the EPW committee, added that “flexibility” would be critical to the successful implementation of the IIJA.

“As you all know, no two states are alike – that is why flexibility is the key,” she said. “What you do in Louisiana and Washington State is very different than what we do in West Virginia. That’s why what we love to create [in Congress] does not always fit into buckets of what you need to move forward on what you need to do.”

Moving forward on IIJA implementation, however, is getting complicated, as it is an “authorization” law, not a “funding” law, per se, explained Rep. Sam Graves, R-Mo., ranking member of the House Transportation and Infrastructure committee.

“The biggest criticism is that IIJA not paid for, and that could be a huge problem,” he said. “We still have a lot of work to do in terms of funding the IIJA. Also, Congress’ biggest job over next two to four years is oversight of how that money will eventually be spent.”

Rep. Graves said that it would be up to state DOTs to transportation keep projects moving forward and on budget – especially as the impact of inflation grows. “Materials and labor are costing more and more, meaning you will be able to do less and less with the dollars we’ve allocated,” he stressed. “Hopefully, we’ll see that situation turn around.”

Yet Rep. Eleanor Holmes Norton, D-Washington D.C. – chair of the House T&I Subcommittee on Highways and Transit – emphasized that, “doing nothing” when it comes to the nation’s transportation system “is no longer an option.”

She said, “We must repair and maintain our existing assets while giving states the flexibility to apply funds as needed” yet stressed that, “flexibility is not the same as complete autonomy. We need to protect our most vulnerable communities and make them more resilient, livable, and affordable.”