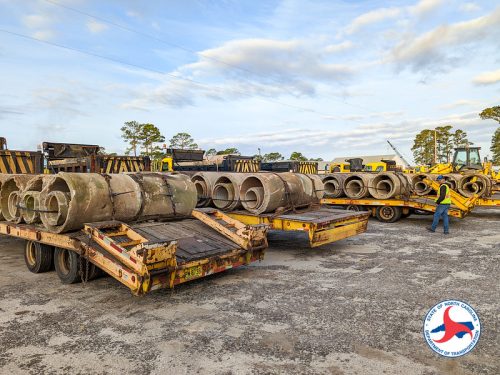 NCDOT sent those discarded culverts – which accumulated over the past several years as the result of an aggressive pipe replacement program in part due to damage caused by recent hurricanes – to the Port of Wilmington for eventual deployment off the Brunswick County coast.

It said artificial reefs create habitat for fish by creating three-dimensional structures that replicate the ecological functions of food and refuge fish and other marine life need to survive and create “crucial” spawning and foraging habitat for many commercially and recreationally important fish species.

The fisheries division has been working with NCDOT to find “new and cost-effective uses” for scrapped concrete pipe. Using that piping to build artificial reefs for marine life along the state’s coastline in a money saver, the agency noted – eliminating $65,000 in tipping fees to dispose it in a construction and demolition landfill.

Ken Clark, a NCDOT district engineer, said the idea for donating the pipe arose during a conference for coastal resiliency. That is when he discovered the state’s marine fisheries division could repurpose his stockpile of precast concrete, barreled-shaped pipe to augment existing artificial reefs.

“We had considered many options on how to properly dispose of this unusable material, when we formed this unique collaboration with the Division of Marine Fisheries last year,” he explained in a statement. “This program mutually benefits both state agencies.”

Other state departments of transportation are involved in similar artificial reef construction projects.

For example, in 2020, the New York State Department of Transportation began helping expand a series of artificial reefs off the shores of Long Island as part of a three-year long multiagency effort – dumping a retired tugboat, 16 rail cars, and a streel turbine on Hempstead Reef.

“[We are] proud to work with our sister agencies on this important program, repurposing transportation materials to expand artificial reefs and support biodiversity, fishing, and tourism,” explained Marie Therese Dominguez, NYSDOT’s commissioner, in a statement at the time.

“It is another example of how [our state] is taking bold steps to protect our ecosystems and foster sustainable economic growth that will benefit current and future generations of New Yorkers,” she said.