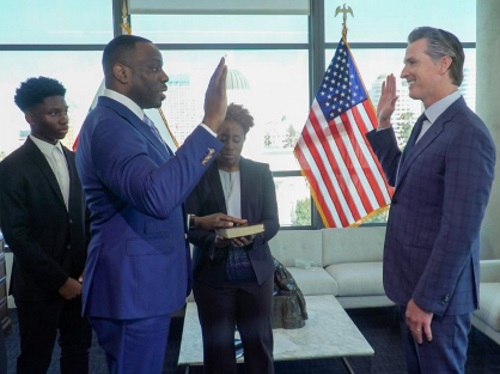 [Above photo by the California Governor’s Office]

Omishakin has served as director of the California Department of Transportation or Caltrans since 2019.

Omishakin previously served as deputy commissioner for environment and planning at the Tennessee Department of Transportation from 2011 to 2019 and as director of healthy living initiatives in the Nashville Mayor’s Office from 2008 to 2011.

He also serves in key roles for the American Association of State Highway and Transportation Officials – particularly as chair of the Council on Active Transportation since December 2019.

That council deals with issues related to bicycles and pedestrians, as well as improving access to transit and other active transport modes. In his capacity as council chair, Omishakin helped develop a “research roadmap” to “prioritize and categorize” state department of transportation pedestrian and bicycle infrastructure investments in the near future.

Omishakin also recently implemented a new “Director’s Policy on Road Safety” at Caltrans, which commits the department to the “Safe System” approach for roadway management and reaffirms the agency’s focus on reaching zero fatalities and serious injuries on state highways across California by 2050.

“[We are] fully committing to a fundamental shift in road safety and are? laying the framework for significant reductions in roadway deaths and injuries,” Omishakin said in a statement at the time.

“We play an important role in the building and maintaining of the state’s highways,” he explained. “With the numbers of serious injuries and deaths trending the wrong way, now is the time to focus even more on what we can do to save lives and work collaboratively with other stakeholders who play a role in roadway safety.”