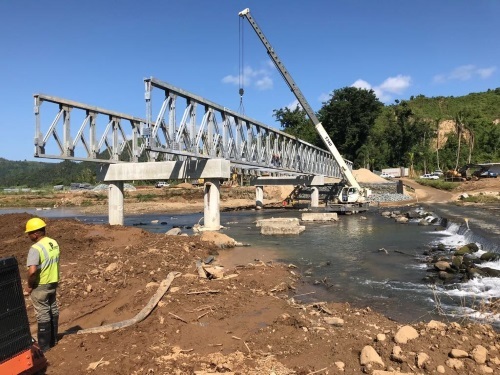 The U.S. Department of Transportation is providing $1.14 billion over five years to Puerto Rico and four U.S. territories – American Samoa, the Commonwealth of the Northern Mariana Islands, Guam, and the U.S. Virgin Islands – to repair and rebuild roads and bridges.

[Above: Replacement of a bridge in Puerto Rico. Photo by U.S. Bridge.]

That funding – which comes from the $1.2 trillion Infrastructure Investment and Jobs Act or IJJA, signed into law in November 2021 – represents a 14 percent in funding for Puerto Rico and those territories compared to the fiscal support provided by the 2015 Fixing America’s Surface Transportation or FAST Act.

“[It] will help move forward major repairs to highways and bridges and improve transportation systems on these islands,” she added.

In December 2021, Puerto Rico and the U.S. Virgin Islands were among 42 states and territories that shared in $1.4 billion worth of emergency relief or ER funds issued by the FHWA.

That money went towards facilitating recovery from nearly 200 different emergency events, including Hurricanes Irma and Maria in Puerto Rico; storms and flooding in Nebraska, Iowa, Kansas, California, Alabama, and Kentucky; and many others.